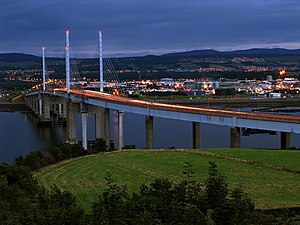 The Kessock Bridge carries the A9 trunk road across the Beauly Firth between Inverness-shire and Ross-shire.

The Kessock Bridge is a cable-stayed bridge across the Beauly Firth, an inlet of the Moray Firth, between the village of North Kessock and the city of Inverness.

The bridge has a total length of 3,465 feet with a main span of 787 feet. Designed by German engineer Hellmut Homberg and built by Cleveland Bridge, it is similar to a bridge across the Rhine in Düsseldorf. The Beauly Firth is a navigable waterway and hence the bridge is raised high over sea level. The four bridge towers dominate the Inverness skyline, especially at night when they are lit.

The bridge carries the A9 trunk road north from Inverness to the Black Isle. It is the southernmost of the "Three Firths" crossings (Beauly, Cromarty and Dornoch) which has transformed road transport in the Highlands. It has proved a key factor in the growth of the city of Inverness.

To protect against any potential seismic activity of the Great Glen Fault, the bridge includes seismic buffers in its construction. These buffers are at the north abutment, nearly over the line of the fault, and they supplement longitudinal restraint at Pier 7, the south main pier. Each buffer is just over 10 feet long and weighs about 2½ tons.[1]

On the south side of the bridge is the Caledonian Stadium, home of Inverness Caledonian Thistle F.C.

Prior to 1982, travellers north of Inverness had the choice of the Kessock Ferry or a journey via Beauly. Cleveland Bridge were awarded the £17.5 million contract in 1975.[2] Construction on the bridge began in 1976, with completion and opening in 1982.[3] It won the combined design and construction Saltire Award.[4]

Transport Scotland estimated in 2012 that 30,000 vehicles per day were using the bridge.[3]

Since 2007, the 25th anniversary of its opening, the Kessock Bridge has featured on the obverse of the £100 note issued by the Bank of Scotland. The series of notes commemorates Scottish engineering achievements with illustrations of bridges in Scotland such as the Glenfinnan Viaduct and the Forth Bridge.[5]

The bridge was resurfaced from February to June 2013.[6]