Keady is a village and parish in County Armagh, situated south of Armagh and near the border with the Republic of Ireland. It is situated mainly in the barony of Barony of Armagh with six townlands in the barony of Tiranny.[1] It had a population of 3,036 people in the 2011 Census.[2] Its name is from the Irish an Céide, meaning "the flat-topped hill".[3]) 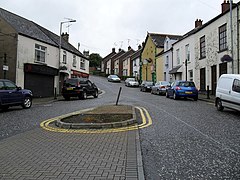 The name Keady is recorded as long ago as 1674 in a letter from Symore Richardson to the Provost of Trinity College, Dublin (the district was part of a grant of county Armagh lands to that college). However, the village did not emerge as an important centre until the mid 18th century when the use of waterpower led to the growth of great linen mills and factories. By 1837, Keady was noted as being the centre of an important flourishing linen trade by Samuel Lewis in his Topographical Dictionary of Ireland. The Keady Monument was erected by the local people to honour William Kirk, who through his mills at Keady and Darkley, provided so much economic prosperity in the area. The village also became a centre of tailoring before World War I, and the arrival of the railway brought the town great commercial benefit, although the lines for both goods and passenger traffic have since closed. Until recently Keady retained its links with clothing manufacture, with a major textiles firm employing many local people, this has since closed. Situated on the river Clea (which flows from Clea Lake to the River Callan), Keady is noted chiefly for the 'Keady trout Lakes'. It is also of interest to the industrial archeologist as the centre of a district with many derelict watermills. Tassagh Glen, just outside the village, has a mill and viaduct of great size. The newly restored mill in the middle of Keady offers the visitor a glimpse into Keady's industrial past.

Gaelic games have been popular in Keady since the 19th century. The local Gaelic football club, founded in 1888, is Keady Michael Dwyer's GFC. The hurling club, founded in 1949, is Keady Lámh Dhearg; prior to 1949 the Dwyer's club also fielded hurling teams, as did the defunct Éire Óg club in the 1920s and early '30s.

The parish contains the villages of Darkley and Keady.[1]

The parish contains the following townlands:[1]