Cairnryan is a small village in Wigtownshire on the eastern shore of Loch Ryan. The village is important in maritime history, with a ferry service connecting Great Britain with Northern Ireland. 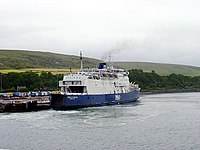 Cairnryan has two ferry terminals connecting Wigtownshire to County Antrim. The first opened in 1973, originally operated by Townsend Thoresen and now by P&O Ferries, and from here sails the ferry to Larne. The second at Old House Point is operated by Stena Line from which are sailings to Belfast.[1]

There is now also a bus link to Stranraer railway station.

Cairnryan was established in 1701, when Lochryan House was built, along with many of the houses in the North End of the village, for workers on the Lochryan Estate. A slate quarry may be seen in the side of the face of the Cairn Hill which overlooks the village, where the slates for the housing roofs were sourced from. Features of the estate included a deer park, and a bowling green. These, along with houses on the shore side of the main road, would make way for the war construction the village would see.

During Second World War, Cairnryan became No.2 Military Port, and three harbour piers and a military railway, linking the village with nearby Stranraer, were built by the army. Only one pier remains; one was dismantled and another was destroyed in an ammunition explosion shortly after the war. The remaining pier is now in a state of disrepair and is fenced off. Despite this many anglers use this pier for mackerel, cod, dogfish, mullet and plaice.

Thousands of troops were based locally, in military camps. At the end of the war, the Atlantic U-boat fleet of the Reichsmarine surrendered in Loch Ryan and was anchored in the port before being towed to the North Channel and scuttled. This activity was codenamed 'Operation Deadlight'.

For a period after the war, the port was used to load surplus ammunition onto army landing craft for disposal at sea – a hazardous task, which took the lives of several at the port, while the long-term and wider risks of such dumping have only later become more evident.

In 1957 and 1958, Cairnryan Wharf and the port/jetty were again used in a joint Army/RAF operation called 'Operation Hardrock'. This operation was to build a rocket-tracking station on the remote island of St Kilda. Heavy plant and other equipment was transported using RASC Landing Craft Tanks (LCTs). Military activity ceased in the early 1960s, when most of the military infrastructure was abandoned, then dismantled, apart from the pier.

In the early 1950s, to the South End of the village, houses for were built at Claddyburn Terrace, which increased the village's population.

In the late 1960s, Ship breaking became the main industry; the British aircraft carriers HMS Centaur, HMS Bulwark, HMS Eagle, and HMS Ark Royal were all sent for demolition, as well as a number of other vessels, including HMS Mohawk and HMS Blake. As recently as 1990, Soviet Navy submarines were being dismantled for scrap.

The main facilities in the village today, are the Lochryan Hotel, some bed and breakfasts and guest houses, the caravan site built on the site of an old war camp site, Village Shop and the Merchant's House Restaurant. Up until the early 2000s, there was also a Post Office and petrol station. The village church was demolished in 1990.

Its status as a ferry port looks to be secured, with P&O Irish Sea continuing to depart from Cairnryan and Stena Line operating from a new terminal at Old House Point.[2] This means a major financial investment in the North Channel routes and significant long term security for the village and the wider Loch Ryan basin.