Howden is a small market town in the East Riding of Yorkshire. It is on the A614 road about three miles north of Goole and 17 miles south-east of York. The M62 motorway runs to the south.

Howden is surrounded by largely flat land and in some places marshland. Much of the land surrounding Howden is separated by many drainage dykes.

The town is on the A614, although the town itself has been bypassed. Howden lies close to the M62 and the M18 motorways, nearby to Goole which lies at the opposite side of the River Ouse. The town is served by Howden railway station, in North Howden.

One of the earliest recorded parts of Howden's history is when King Edgar gave Howden Manor in 959 to his first wife, Ethelfleda,[2] which began a long connection with the royal court.

In 1080, William the Conqueror gave the town, including its church, which later became the minster, to the Bishop of Durham, who promptly conferred the church upon the monks of Durham. However, he kept Howden Manor for himself. Records show that the church was at first a rectory, but conflicting records also show that Hugh, Prior of Durham, was given a Papal bull for appropriating the church towards the maintenance of 16 monks.[3] 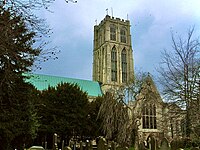 In 1228, work began on the current Howden Minster, though it was not finished until the 15th century when the chapter house and top of the tower was added by Bishop Walter de Skirlaw.

In the 14th and 15th centuries, Howden became a centre for pilgrims because of John of Howden's alleged miracles in the latter part of the 13th century.[4] The most prolific of these tales was that John of Howden, at his funeral in 1275, raised his arms from his open coffin during his requiem mass to greet the host. As such, he has become locally regarded as a saint. Through the pilgrims, Howden received the money that it needed to complete the minster, fulfilling John of Howden's prophecy that he would continue aiding the minster from beyond the grave. Pilgrimages continued until the Reformation. 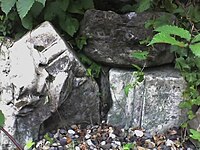 In 1538, Henry VIII's Parliament dissolved the Collegiate churches, including Howden. During her reign, Elizabeth I gave the revenues of the Manor of Howden to local landowners. But these landowners refused to repair the choir of the church,[1] which eventually fell into ruin.

The minster fell into further ruin during the Civil War, when the Parliamentarians used it as a stable during their stay on the way to lay siege to Wressle Castle. The soldiers damaged the interior extensively, destroying the organ, much of the wooden structures, and damaging some of the masonry. It is said that when leaving the town they were playing the pipes of the organ like penny whistles.[1]

On the night of 29 September 1696, after nearly 150 years of neglect, the roof of the choir fell down. The minster ruins were left where they fell until 1748 when the site was cleared, and the townsfolk took them for their own. Many used the masonry as building stones.[1]

From 1665-1794, a site on Pinfold Street in Howden was used as a lodging house for the needy. A workhouse was then opened on the site which included a manufactory, stone-breaking yard, cowshed, and prison. A parliamentary report of 1776 listed the parish workhouse at Howden as being able to accommodate up to 20 inmates.

Howden Poor Law Union was formed on 4 February 1837. Its operation was overseen by an elected Board of Guardians, 42 in number, representing its 40 constituent parishes. Initially, the Howden Guardians declined to build a new workhouse but made use of the existing parish workhouses in Howden, Holme and Cave. However, in 1839, following persuasion by the region's Assistant Poor Law Commsissioner John Revans, a new building was erected on the south side of Knedlington Road. It was designed by Weightman and Hadfield of Sheffield.

In the early 19th century Howden became famous throughout Europe for its horse fair, held every September. In Georgian times, the fair was quoted in The Sporting Magazine in 1807 as being the "largest fair for horses in the Kingdom".[5]

The fair, at its height, attracted all the principal horse dealers from every part of the United Kingdom. It is estimated that up to 4,000 horses were displayed for sale every day of the fair and that the total worth of this kind of sale was £200,000.[5]

Howden's first railway station opened in 1840 and a second on the Hull and Barnsley Railway was open between 1885 and 1955. The town was the scene of an early rail disaster which killed five passengers when a large iron casting fell from a wagon, and derailed the train. It was one of the first accidents to be investigated by the new Railway Inspectorate.

In 1916, during the First World War, the Admiralty established RNAS Howden as a base for airships to defend shipping along the east coast. The new jobs helped to turn the town's fortunes around, which had been suffering since the building of the port at nearby Goole, and the passing of the horse fairs.[6]

Between the world wars, and then during the Second World War, the author Nevil Shute worked in Howden for the Airship Guarantee Co., as part of the team that created the R100. While here, Shute worked alongside Barnes Wallis, the scientist and inventor of the bouncing bomb. Shute lived at number 78 Hailgate, and a plaque is now fixed to the house to commemorate this.[7]

Shute wrote in his autobiography:

"The lads were what one would expect, straight from the plough, but the girls were an eye-opener. They were brutish and uncouth, filthy in appearance and in habits. Things may have changed since then – I hope they have. Perhaps the girls in very isolated districts such as that had less opportunity than their brothers for getting into the market and making contact with civilisation; I can only record the fact that these girls straight off the farms were the lowest types that I have ever seen in England, and incredibly foul-mouthed."

In 1932, Howden Minster's renovations were completed, and its bells chimed every 15 minutes, a tradition that continues to this day. 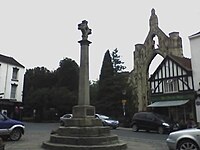 In the latter part of the mid-20th century, two banks and a Co-op, the town's largest grocery store, opened, giving the people of Howden a more convenient infrastructure.