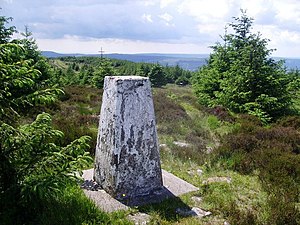 Hirfynydd is a 1,578-ft-high hill in Glamorgan. A Roman road, Sarn Helen, runs along its entire northeast–southwest ridge-line, a route followed by a modern-day byway. To its west is Cwm Dulais and to its southeast is the Vale of Neath. The northern end of the ridge falls away to a broad upland vale containing the Afon Pyrddin and beyond which is the Brecon Beacons National Park.

The larger part of the hill is afforested with conifers. In between the plantations are areas of past or present opencasting for coal.

The upper parts of the hill are formed from the hard-wearing sandstones and intervening mudstones of the Pennant Sandstone. Beneath these are the mudstones and coal seams of the South Wales Coal Measures. All the strata are tilted in a generally southerly direction towards the axis of the South Wales Coalfield syncline though there is significant local variation, due in part to the proximity of the eastern slopes of the hill to the Neath Disturbance.[1]

The Bronze Age Carn Cornel Round Cairn is on the shoulder of hillside, west of the ridge and Roman road. (Location: 51°44’34"N, 3°42’55"W) It is a pile of stones marking a burial, and occupies what appears to be a natural mound. Close by is a boundary stone, suggesting that the site became a historic boundary mark.[2]

On the top of the ridge, at a height of 1,476 ft, is a small square earth-banked enclosure, 60x62 feet, with rounded corners. (location: fortlet 51°44’48"N, 3°41’52"W).[3] This is a Roman fortlet, or Castellum, used to both control the Carmarthen to Brecon Sarn Helen Roman road, and provide a signal station with wide visibility to the surrounding area. The enclosure is a Scheduled Ancient Monument.[4]

There are a group of mediæval house platforms on the edge of a plateau of the Hirfynydd ridge, beside the steep slopes of the Dulais valley, showing where a settlement had been. (Location: 51°44’35"N, 3°43’50"W). A banked rectangular enclosure has a house platform in the west corner. Two further platforms are west of the enclosure. The site is a Scheduled monument and is also called Coed Ddu and Nant-y-Cafn enclosure.[5]

Parts of the hill are available as open access for walkers under the Countryside and Rights of Way Act 2000. In addition there are numerous forest tracks which provide access and public rights of way in some areas. Saint Illtyd's Walk, a recreational walking trail follows a public bridleway to pass over Hirfynydd between Crynant and Resolven.[6]