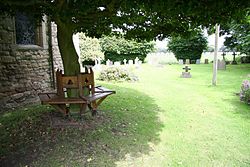 The Church of St James dominates the village. The church has Saxon origins [3][4][5] but the main part of the existing building was established about AD 1100 and handed over to Avice de Tania in 1153 AD to be put under the care of the Cistercian nuns at Hampole.[6] It was originally intended as a Chapel of Ease to the Priory at Hampole, which had been founded a few years earlier by Avice de Tania with her husband, William (de) Clairfait,[7] whose gift and that of the churches of Adwick and Melton were later confirmed by Archbishop Roger of York.[8][9][10]

Until at least the reign of Richard II (1377–1400), the church was known as the "Church of All Hallows" and served by nuns from the Hampole Priory, along with Chaplains appointed by them. About this time, a tower was added and a Lady Chapel[11] to the south-east. As a result, the ground plan is rather unusual, having two aisles - one through a short nave within the chancel and the western tower, and also a continuous south aisle to the whole length of the church leading to the Lady Chapel.

Before the Reformation there was no ecclesiastical parish of High Melton (then known as Melton-super-Montem or Melton-on-the-Hill), remaining under the spiritual direction of the Priory at Hampole, which appointed a Curate[12] and claimed the income from the lands.[13] No Vicar was appointed until following the Civil War, when John Norobolt was installed as first Vicar of Melton-on-the-Hill in 1660 following the Restoration.[14]

This Yorkshire article is a stub: help to improve Wikishire by building it up.
Retrieved from "https://wikishire.co.uk/w/index.php?title=High_Melton&oldid=66355"
Categories: