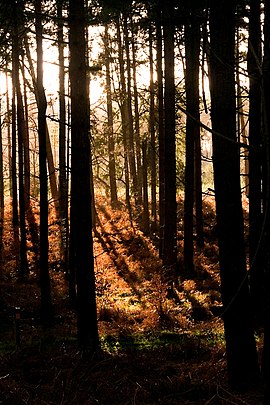 Thetford Forest on the Hereward Way

The Hereward Way is a long-distance footpath stretching from Rutland to Norfolk, that links the Viking Way at Oakham with the Peddars Way at Knettishall Heath, near Thetford. It is 110 miles long.

The path takes its name from Hereward the Wake, the 11th century leader who fought a campaign of resistance against William the Conqueror, and who had his base ultimately on the Isle of Ely, which the path passes through near the middle of its course.

The footpath runs through:

It also goes through Thetford Forest. It links two other long-distance footpaths: the Viking Way in the west and Peddars Way in the east.

In August 2006, Hereward Way between Wansford and Southorpe near Peterborough was diverted under a City Council improvement plan.[1] The re-routing was complete with the Peterborough Local Access Forum and means that walkers do not pass alongside the A47.