Hemsworth is a small town in the West Riding of Yorkshire.

This was a one-industry town, where coal mining employed the vast majority of residents, and the closure of the pits during the 1980s led to huge levels of unemployment and deprivation in the area. Hemsworth, along with nearby villages such as Ackworth, Fitzwilliam, Havercroft, Ryhill, South Elmsall and South Kirkby was made into a special regeneration area, and fortunes have improved as a result.

The parish church is St Luke's.

In May, 2005, the Office for National Statistics estimated that unemployment in Hemsworth was just 2.8%. This marks progress from periods in the previous two decades when it could reach as high as 50%. A large portion of the West End estate and blocks of flats around the Scotch estate in Hemsworth have been demolished to be "regenerated" as in recent years the area suffered badly from the closure of the mines leading to high crime rates and crushing unemployment. 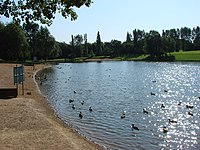 In the Water Park, there is also Playworld, an outdoor adventure playground, which is suitable for children of all ages with a tower slide, climbing frames, a toddlers' sandpit area and a miniature railway.

A new kiosk and toilet facilities were opened in March 2006. New equipment was introduced in 2008. A new restaurant, which opened in 2011, is situated adjacent to the larger of the two fishing lakes, and serves hot and cold meals, drinks and snacks.

Along with the neighbouring village of Kinsley it is mentioned in the Domesday Book of 1086, which records its name as Hamelsworde.

Hemsworth was used in an episode of the Top Gear series: Series 4 episode 2.