Halton Gill is a hamlet in Littondale in the Yorkshire Dales, in the West Riding of Yorkshire. It stands two miles up Littondale from Litton. A minor road leads south-west to Silverdale and Stainforth in Ribblesdale.

The hamlet was historically a township in the ancient parish of Arncliffe, and it is within the Staincliffe Wapentake.[1] Halton Gill became a separate civil parish in 1866.[2] 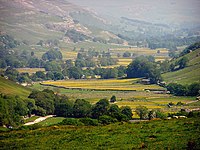 Down Littondale by Halton Lea

From Halton Gill there is a bridleway over the Horse Head Pass to the north east to Yockenthwaite in Langstrothdale. This path was used by the priest from Hubberholme to reach the small chapel in Halton Gill. To the west paths lead to the summit of Pen-y-ghent by way of Plover Hill. 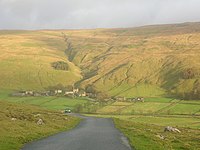