Grayrigg Forest is a treeless hill in Westmorland, by the eastern edge of the county, and the west side of the upper dale of the River Lune, beyond which rise the Howgill Fells.

The summit of the hill is at 1,621 feet above sea level,[1] and it is attainable from the Westmorland Borrowdale, through which the Borrow Beck courses down to the Lune.

From near the summit, there are impressive views down into the gorge of the Lune valley, where road, West Coast Main Line railway, M6 motorway and River Lune crowd between the outliers of the Lake District and the Howgill Fells. 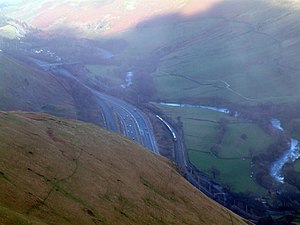 The Lune valley with M6 and West Coast Main Line, from near the summit of Grayrigg Forest
Retrieved from "https://wikishire.co.uk/w/index.php?title=Grayrigg_Forest&oldid=51303"
Category: