Girvan is a town and burgh in Carrick, Ayrshire. It received its burgh charter from King Charles II in 1668.

The town has a population of about 8,000. Originally a fishing port, Girvan is now also a seaside resort with beaches and cliffs. It is found 22 miles south of Ayr, and 29 miles north of Stranraer, the principal ferry port to Ulster.

The town has several fish and chip shops and pubs. Just north of the town is a William Grant & Sons distillery, also there is a Nestlé factory that manufactures chocolate that is shipped down to York and used in Kit-Kat and Yorkie bars. 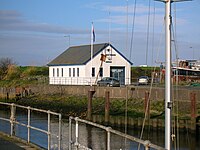 The Girvan Folk Music Festival takes place on the first weekend of May each year. Girvan also has a folk music club.

The Lowland Gathering takes place on the first Sunday of June each year in the Victory Park in the centre of the town.

The annual Festival of Light takes place on the first Saturday in November. Its roots lie in the traditional bonfire night celebrations and the Celtic fire festival it replaced.[1]

Nearby places of interest

Culzean Castle is about 8 miles north of the town, and the volcanic island of Ailsa Craig is visible about 10 miles offshore. Turnberry golf course and hotel are located 5 miles north of Girvan.

The coastline south of Girvan is famous for its geology, and also for Sawney Bean's Cave, where the legendary murderer and cannibal Sawney Bean supposedly lived until his arrest and execution in Edinburgh.

Historically, Girvan was significant as the home of the Hairy Tree. According to legend, the Hairy Tree was planted by Sawney Bean's eldest daughter in the town's Dalrymple Street. However, when her family was arrested, the daughter was implicated in their incestuous and cannibalistic activities and was hanged by locals from the bough of the tree she herself planted.

According to local legend, one can hear the sound of a swinging corpse while standing beneath its boughs. The Hairy Tree's whereabouts are currently unknown, but two high profile campaigns have been launched to relocate it.