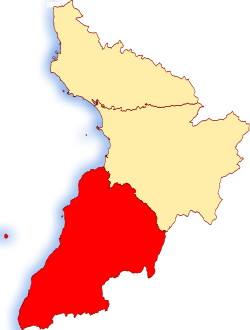 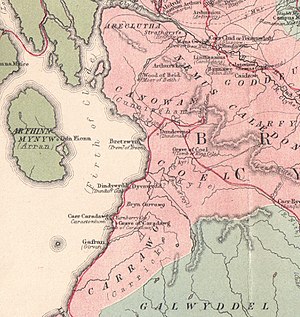 Carrick is a the traditional southern division of Ayrshire, comprising the parts of the county south of the River Doon. It was once a comital district and has a history all of itself. Maybole was its historic capital. It is the least populous of the three districts, with a population of 23,758 at the 2011 census.

Carrick comprises the parishes of:

Carrick was originally part of the Kingdom of Galloway and was ruled over by its lords until 1186, when it was granted to Duncan, son of Gilbert of Galloway. He became the first to hold the title Earl of Carrick. His son, Neil, became the second Earl but he had no male heir so his daughter, Margaret (alias Marjorie of Carrick) inherited and became Countess of Carrick. The Earldom passed to her son Robert de Bruce, later to become King Robert I of Scotland, upon her death in 1270.

Carrick saw some involvement in the wars in which Robert Bruce secured Scotland's of independence and was the scene of much inter-family feuding during the sixteenth and seventeenth centuries with various branches of the powerful Kennedys contending for land and honour.[1]

The scattered villages and rugged terrain of Carrick made it a favourite haunt of the persecuted Covenanters in the seventeenth century and its rocky coastline with its many hidden coves and inlets has made it a favourite location for smuggling.[2] Robert Burns made his living as an exciseman along that coastline in the late eighteenth century.[3]

The title 'Earl of Carrick' is now one of the lesser titles of the heir apparent to the throne, currently Prince Charles, the Prince of Wales, whose principal Scottish title is 'Duke of Rothesay'.