Ailsa Craig is a small, uninhabited island ten miles off the coast of Ayrshire in the outer Firth of Clyde which, by its distinctive muffin shape and location alone in the sea, stands out prominently in the seaward view all along the coasts of the Firth of Clyde and from the north coast of County Antrim.

The island lies in the sea some 10 miles west of Girvan. Two miles in circumference and rising to 1,110 feet, the island consists entirely of the volcanic plug of an extinct volcano that might have been active about 500 million years ago.[1] It is part of the parish of Dailly.

The Ailsa Craig Lighthouse on the east coast faces the mainland of Great Britain, and a ruined castle keep of uncertain origins is perched on the hillside above.

John Keats was in Girvan during his Scottish tour in 1818 and he wrote a fine sonnet inspired by the fairy rock.

Today the island is a bird sanctuary, providing a home for huge numbers of gannets and an increasing number of puffins. 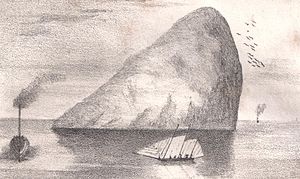 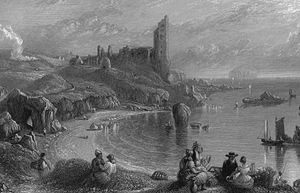 Ailsa Craig in the background with Dunure in 1840

In 1597 Hugh Barclay of Ladyland, a fiercely devoted Roman Catholic, took possession of Ailsa Craig, which he was intent on using as a provisioning and stopping off point for a Spanish invasion which would re-establish the Roman Catholic faith in Scotland. He was discovered by the Protestant minister, Andrew Knox, and thereafter either tried to escape or deliberately drowned himself in the sea off Ailsa Craig.[2]

In about 1695, Martin Martin described Aisla Craig as:

a big rock, about six leagues to the south-west of Arran; it rises in form of a sugar-loaf, but the top is plain, and large enough for drawing up a thousand men in ranks; there is a fresh-water lake in the middle of the plain, the whole isle is covered with long grass, and is inaccessible, except on the south-west side, by a stair cut out in the rock; in the middle of it there is a small tower of three stories high with the top. There is a fresh water spring issuing out of the side of this great rock; below the entry there is a place where the fishers take up their residence during their stay about this rock in quest of cod and ling; and there is a good anchorage for their vessels very near their tents. [3]

The island was used as a prison during the 18th-19th century.

In 1831, the twelfth Earl of Cassillis became first Marquess of Ailsa, who took the title from the Craig, which was his property. The island remains the property of the current Marquess of Ailsa, though now let to the Royal Society for the Protection of Birds as a bird sanctuary.

From the mid-19th to mid-20th centuries, the island was quarried for its rare type of micro-granite with riebeckite (known as "Ailsite") which is used to make curling stones. As of 2004, 60 to 70% of all curling stones in use were made from granite from the island.[4] The floor of the Chapel of the Thistle in St Giles Cathedral, Edinburgh is also made of this rock.

Since the lighthouse was automated in 1990, Ailsa Craig has been uninhabited.[5] Ailsa Craig and its lighthouse feature extensively in Peter Hill's book Stargazing: Memoirs of a Young Lighthouse Keeper.

The island is now a bird sanctuary. Huge numbers of gannets nest here and following a pioneering technique to eradicate the island's imported population of rats a growing number of puffins are choosing to return to the Craig from nearby Glunimore and Sheep Islands.

Ailsa Craig is formed from the volcanic plug of an extinct volcano. It is rich in a blue hone micro-granite with riebeckite, known as "Ailsite".

Though quarry blasting is no longer allowed, loose granite rock from the island is still used for manufacture into curling stones by the Kays of Scotland company.[6] On this account curling-stones are popularly known as Ailsas or Ailsa Craigs.

A columnar cave exists towards the northern side of the island, with formations similar to the basalt columns of Staffa, though not as dramatic. On the eastern are the remains of a tower, with several vaulted rooms. Two springs occur and some scanty grass affords subsistence to rabbits, and, on the higher levels, to goats. The precipitous parts are frequented by large flocks of solan geese and other sea birds.

Ailsa Craig is home to no man but to rabbits. The main creatures of the island are the seabirds; its dramatic seacliffs have the third largest gannetry in the United Kingdom, with 36,000 pairs. It is also rich in guillemots, razorbills, black guillemots and increasing numbers of puffins.

It is designated as a Site of Special Scientific Interest and Special Protection Area because it supports 73,000 breeding seabirds.

Ailsa Craig is accessible only by boat - tours run from Girvan and Campbeltown during summer. 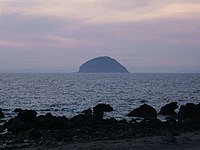 Ailsa Craig, from the Ayrshire mainland

An early reference to the rock is made by Sir Donald Monro, Archdeacon of the Isles who referred to the rock as "Elsay" in the 16th century.[7] The modern name of the island is an Anglicisation of a name it has been given by the seaborne Gaels, Aillse Creag meaning "fairy rock". An alternative Gaelic name is Creag Ealasaid meaning "Elizabeth's rock".

The island is sometimes known as "Paddy's Milestone",[8] being approximately the halfway point of the sea journey from Belfast to Glasgow, a traditional route of emigration for many labourers coming to Scotland to seek work.

As the rock is the most conspicuous mark in the seas between Ireland and Scotland, the island is known by a number of different names;