From Wikishire
Jump to: navigation, search
Not to be confused with Horley, Oxfordshire

Horley is a town in the very south of Surrey. Gatwick Airport stands to the south, just by the Sussex border, beyond which is the town of Crawley. Horley is a commuter town within the London commuter belt, served by fast links by train to London.

In the past the Weald was a densely forested and marshy area. During the Anglo-Saxon period the Manor of Horley came under the control of Chertsey Abbey, a very rich institution. The Manor passed to the King at the dissolution of the monasteries in 1539 and changed hands several times during the next sixty years.

To the southeast is the overgrown but well-preserved site of Thunderfield Castle, a twelfth century ring and bailey castle.[1]

In 1602 the manor became the property of Christ's Hospital in London and the original map of the manor is now held at the Guildhall in the City of London. This shows that Horley consisted of three hamlets around a huge open common. One was around the area occupied by St Bartholomew's Church and the Six Bells public house; another by the River Mole and the third in Horley Row where some of Horley's oldest buildings can still be seen.

The Common was enclosed in 1816, new roads were laid and the intervening land was sold. In 1809 and later in 1816, two turnpike roads were introduced to allow the operation of regular coach services from London to Brighton. The railway was laid in 1841 and a station was built in the town. From that position, and from that date, Horley grew at a slow rate until 1950. Since then its population has doubled. 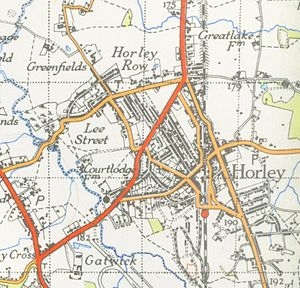 In 2005 the local council produced a "Master Plan" which determined that almost 2,600 new homes would be built in the village: this caused no little disquiet in Horley as all the land hereabouts is green-belt and the character of the village has been placed in danger.

Much of the town's economic dynamic is driven by the presence of Gatwick Airport. At one time the airline Dan-Air had its head office in the Newman House in Horley.[2] At times in history, British Caledonian,[3] British United Airways,[4] and Laker Airways had their head offices on the property of Gatwick Airport near Horley.[5]

The Matbro works which produced forklift trucks from the 1950s to the 1980s and pioneered telescopic handlers were in Horley. The bright yellow Teleram 40 and Teleram C machines were very popular with farmers and construction companies.

Horley is the present home of Scotia Gas Networks.

In 1908 the first scout patrol, the pewit patrol, was established. After gaining members this patrol formed 1st Horley scout group which them merged with 2nd Horley in 2006.[6]

The Archway Theatre is found under the arches of the Victoria Road railway bridge. The theatre consists of a bar, auditorium, studio theatre and rehearsal rooms. The main auditorium seats 95 and the studio seats 40. The company presents 10 full productions each year as well as a number of studio events and youth productions.[7]