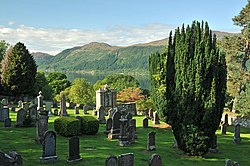 Boleskine and Abertarff is a united parish of central Inverness-shire, containing the north-east foot of Loch Oich and the south-west head of Loch Ness. The Abertarff portion lies mostly to the west of Loch Ness and the Caledonian Canal with the Boleskine portion to the east. The parish contains the village of Fort Augustus, 33½ miles south-east of Inverness, and 31½ north-west of Fort William.

The parish is bounded to the north-east by Dores and Daviot and Dunlichity, to the east by Moy and Dalarossie, to the south by Laggan, to the south-west by Kilmonivaig and to the north-west by Urquhart and Glenmoriston. It has a length from north to south of from 8⅜ to 15 miles, a breadth from east to west of from 1⅝ to 20 miles, and an area estimated at 210 square miles.

The only main roads through the parish are Thomas Telford's A82 to the west of Loch Ness and its predecessor, General Wade's Military Road (the B862) to the east. A section of the B852 branches off from the Military Road north of Whitebridge and follows the river Foyers down to the Loch.