Florence Court is a large 18th-century house and estate at Florencecourt in Fermanagh, eight miles south-west of the county town, Enniskillen. It is set in the foothills of Cuilcagh Mountain, the county top. The nearby village takes its name from the estate.

Florence Court is owned and managed by the National Trust, one of three National Trust properties in the county, along with nearby Castle Coole and the Crom Estate.

Florence Court was the seat of the Earls of Enniskillen before the National Trust acquired it in 1953, shortly before a devastating fire destroyed the upper floors of the house. Extensive restoration efforts have since returned Florence Court to much of its former glory, although some rooms on the upper floors remain closed. The house is best known for its exquisite Rococo decoration and fine Irish furniture. Many original items of furniture, previously sold, have been re-acquired and returned.

The estate includes a walled garden with displays of both temperate and semi-tropical plants, a working water-powered sawmill, an ice house, a natural spring well and the Florencecourt Yew. The Larganess River flows through the estate. Pasture lands and forestry occupy much of the estate. It is a prime source of yew wood.

Early on the morning of 22 March 1955, a fire broke out on the first floor landing at Florence Court, adjacent to Lady Enniskillen's bedroom. Whilst fire brigades almost had control of the fire by 9 am, dry weather conditions helped re-ignite the blaze. Flames reached the roof of the building which crashed down into the hall, so that by the evening around two-thirds of the Florence Court interior lay in ruins.

Lady Enniskillen, born Mary Cicely Nevill of the Marquesses of Abergavenny, discovered the fire, which broke out during one of her husband's rare absences from home. After rushing downstairs to the servant's quarters to raise the alarm, she went to nearby Killymanamly House to telephone the elderly 5th Earl of Enniskillen (1876–1963), at the Ulster Club in Belfast to tell him that the house was on fire. He is said to have cried "What the hell do you think I can do about it?". 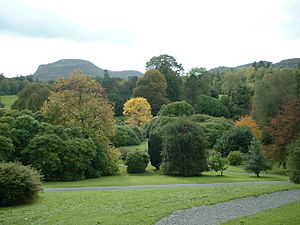 Much of the damage to the interior of Florence Court was caused by the gallons of water pumped onto the flames. The Dining Room, with its exquisite plasterwork decoration, was saved only by the prompt action of local builders Bertie Pierce and Ned Vaughan who, on the instructions of Viola Grosvenor, later the Duchess of Westminster, drilled six holes in the flat part of the ceiling to allow the water which had accumulated on the floor above to quickly drain away and thereby preventing ceiling collapse. Two of these holes are still evident in the Dining Room today.

The fire was only one of a series of events in the 1950s and 60s at Florence Court which marked the end of an era for the house and family. Following Second World War falling agricultural prices, rising wage costs, death duties and a drastic reduction of the size of the demesne, the lifestyle of the 5th Earl of Enniskillen and his second wife Mary (née Nevill), was increasingly difficult to sustain. To secure the long term future of the house, Lord Enniskillen gave Florence Court to the National Trust in 1953. It was opened to the public the following year.

The 5th Earl, upon his death, was succeeded by his nephew, Captain David Lowry Cole, MBE (1918–1989), in 1963, who became The Rt Hon The 6th Earl of Enniskillen. David Enniskillen (as he was popularly known) had spent much of his life in the Colony of Kenya, having been elected a member of the legislative council of Kenya in the early 1960s, just before independence. 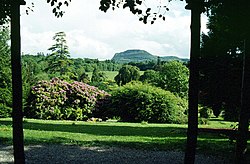 Blandings, a BBC comedy based on a series of P G Wodehouse stories, was filmed in parts at Florence Court. Most of the series, however, was filmed at Crom Castle. The series was first broadcast on BBC 1 during January and February 2013.