Water from the southern slope flows underground until it emerges some miles away in the Shannon Pot in County Cavan, the famed source of the River Shannon.

The mountain’s name is Gaelic and means "chalky peak".

Cuilcagh Mountain has one of the largest expanses of blanket bog in Northern Ireland, on a relatively high elevation upland landscape, bounded by limestone grassland to the north and montane habitats to the south. The blanket bog exhibits a wide range of characteristic vegetation and structural features, with well-developed pool, hummock and lawn features, acid flushes and bog bursts.

The bog vegetation is characterised by luxuriant Sphagnum mosses but over most of the site dwarf-shrubs and graminoid herbaceous species dominate. The Cuilcagh area supports a rich assemblage of upland insects, and is one of the most important sites in Ireland for these species. Species recorded include the water beetles Agabus melanarius, Agabus arcticus, Dytiscus lapponicus, Stictotarsus multilineatus, Hydroporus longicornis and Hydroporus morio and the water bugs Glaenocorisa propinqua and Callicorixa wollastoni. Lough Atona is the main locality for these species.[1] 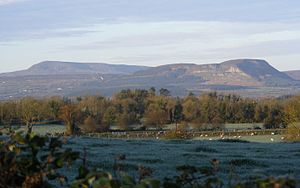 Benaughlin from South Fermanagh in November 2007; Cuilcagh on the upper left

The Cuilcagh Mountain Ramsar site (wetlands of international importance designated under the Ramsar Convention), is 6,782 acres in area, at 54° 13’ 26” N, 07° 48’ 17” W. It was designated a Ramsar site on 31 December 1998. The site qualified under Criterion 1 of the Ramsar Convention because is a large and relatively intact example of a blanket bog and one of the best examples of this habitat in the United Kingdom.

The site also contains a comparatively high-altitude example of an oligotrophic lake, Lough Atona. The site also qualified under Criterion 2 because it supports numbers of rare, vulnerable or endangered species. It is one of the most important upland breeding sites in Northern Ireland for the golden plover, an Irish Red Data Book Species. Other Irish Red Data book bird species occurring on the site include merlins. The bog is also occasionally used for feeding by greater white-fronted geese.[2]