Edzell is a village and parish in Angus adjacent to the border with Kincardineshire. The village is located five miles north of Brechin, by the River North Esk which here forms the parish and county boundary.

Edzell is a Georgian-era planned town, with a broad main street and a grid system of side streets. Originally called Slateford, Edzell was renamed in 1818 after an earlier hamlet a mile and half to the west, which by then had been abandoned. Edzell's population in 2004 was 780.[1]

The original village of Edzell was located around the walls of the first Edzell Castle, a motte and bailey structure to the south of the present castle. Of this village, only part of the church now remains, within the original churchyard.

The existing village of Slateford was expanded in the early 19th century by the Earl of Panmure. The new parish church, replacing the one in the old village, was built in 1818 on the village's north boundary, and led to the official renaming of the village as Edzell.

In 1861, Queen Victoria and Prince Albert visited Edzell, as part of a Royal progress through Angus and Kincardineshire, just weeks before Albert's sudden death.

Edzell was not connected to the railway until 1896, and only had a passenger service until 1931, although it reopened experimentally in the summer of 1938. The line closed to freight traffic in 1964. In the twentieth century, the increasing popularity of golf led to more tourists visiting Edzell Golf Club. At one point the village had three large hotels, but it now has only two, along with a series of B&Bs. There are two tearooms, a pharmacy, a post office, two shops and two hairdressers. 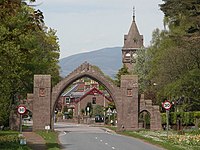 The most distinctive landmark of the village is the Dalhousie Arch, which spans the main road into Edzell from the south. It was erected in 1887 to commemorate the deaths of the 13th Earl of Dalhousie and his wife, both of whom died on the same day. Confusion with a similar arch in the neighbouring village of Fettercairn, built in 1864 to commemorate Victoria and Albert's stay at the village's Ramsay Hotel, has led to the common belief that Edzell's arch was built to commemorate the Queen's Golden Jubilee in the same year, 1887.

Other significant buildings in the village include the Inglis Memorial Hall, a gothic building gifted to the village by Sir Robert Inglis in 1896, in memory of his father. It now houses the local library.

Edzell Muir is a large expanse of parkland and sport fields to the north of the village, used extensively for picnicking and municipal events.

A former Royal Air Force airfield RAF Edzell is situated four miles from Edzell by road, but only a mile due east, over the North Esk. It was active for over fifty years, first as a RAF station during Second World War, and later on lease to the United States Navy from 1960 until its decommissioning in 1996, and final closure in 1997.[2] Its stock of 150 houses were sold off in 1999 to become a new, independent village called Edzell Woods.

One product of the American Navy presence at Edzell was the creation of a registered tartan for the US Navy cryptologists of the Navy Security Group Activity (NSGA) at Edzell. The tartan design was created at by Strathmore Woolen Company at the request of Mrs Janet Demech (wife of Edzell's commander, Captain Fred R Demech, USN), with input from Mrs Demesh and Mrs Pam Schaffer. The tartan was unveiled on 6 July 1985, the 25th anniversary of the US Navy presence at Edzell.[3] While the American Navy site at Edzell was closed in September 1997 (after 37 years of service) the "US Navy Edzell" tartan [4] continues to increase in (unofficial) popularity with US Navy personnel, particularly members of the Cryptologic and Intelligence specialties.