Fenny Stratford is a constituent town of Milton Keynes in Buckinghamshire. Originally an independent town, it was included in the Milton Keynes "designated area" area in 1967. It is found at the south-eastern edge of the new town and is its gateway to northbound travellers on the A5.

Fenny Stratford is bordered by North Sreet, Bletchley Leisure Centre, Knowles School/Leon Recreational Ground and the Fenny Allotments from the west, the Rail line, Watling street and Denbigh East from the north, Water Eaton Brook by the south and the River Ouzel and Grand Union Canal from the east.

The town name is an Old English word that means 'marshy ford on a street (Roman road)'. The road in this case is the Watling Street, the old Roman road from Londinium. 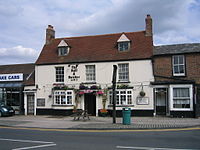 Fenny Stratford is a busy small town at the edge of the Milton Keynes urban area. It still doesn't have a market, but the small shopping street gives the town a real community feel. It has its own railway station on the Marston Vale Line, one of the five that serve Milton Keynes.

The Grand Union Canal runs through the southern outskirts of the town and Fenny Lock is located a few tens of yards to the east of Watling Street. It is notable both for the manually operated swing bridge which crosses the lock and for the very small rise in the lock (around 12 inches). This was deemed necessary by the canal engineers in order to avoid building an expensive embankment off to the east. The level persists from this lock for eleven miles, through what is now Milton Keynes and the older town of Wolverton, to the next lock at Cosgrove.

On St Martin's Day 1724 the first stone was laid of the new parish church of Fenny Stratford, marking a fresh start in the town's history. The Church was built on the site of the old Chantry Chapel of St Margaret and St Catherine at Fenny Stratford.

Browne Willis, a historian of the day, had raised the funds for the reconstruction. He erected the church as a memorial to his grandfather Dr Thomas Willis, a famous physician, who lived in St Martin's Lane in the parish of St Martin-in-the-Fields in London, and who died on St Martin's day, 11 November 1675. In order to perpetuate his memory, Browne Willis arranged for a sermon to be preached at St Martin's Church on each St Martin's Day, for which a fee was payable. During his lifetime, he also celebrated the occasion with a dinner attended by local clergy and gentry, an event which has continued to the present day.

The Fenny Poppers are six small ceremonial cannon which date from this time and are still fired ceremonially (with blank charges) today.

There is no record of their first use. In 1740, Browne Willis bought a house in Aylesbury Street, Fenny Stratford and the rent from this was used to pay for the sermon and gunpowder. Following his death in 1760, the traditions were carried on and later documented.

All six Poppers were re-cast by the Eagle Foundry, Northampton in 1859, after one of them burst. It is these that are still in use today and they were recently examined and x-rayed to ensure there are no cracks. During their long history, many sites have been used for this battery. These include; the Canal Wharf, land behind the Church, St, Martin's Hall, the Churchyard and now the Leon Recreation Ground that was once part of the lands belonging to the Chantry.

The Poppers each weighs about 19 pounds. The bore, 6" by 1¾" will take one ounce of gunpowder, which is plugged with well-rammed newspaper. They are fired three times on St Martin's Day (11 November); noon, 2.00pm and 4.00pm precisely. In 1901 they were fired to mourn the death of Queen Victoria; the 81 salutes were heard as far away as Olney. On the 1 January 2000, at 11.00am the Poppers were fired to mark the beginning of the Second Millennium. At 2.00pm on the 4 August 2000, a salute of six Poppers was fired to celebrate the 100th birthday of the Queen Mother.

There are traces of the Roman settlement Magiovinium on the edge of the present day occupation. (Possibly the oldest known gold coin in Britain was found here, a gold stater of the mid-second century BC).[1] The town was recorded in manorial rolls in 1252 as Fenni Stratford, though previously it was just known as Stratford: the prefix being added to distinguish the town from nearby Stony Stratford.

Being an ancient market town, Fenny Stratford was the location of a weekly market for many years until 1665 when the town was badly hit by the bubonic plague. As a result the main road that ran through the town was diverted away from it, and the market died as a result. The market was never reinstated: the town was very much in ruins by the early Eighteenth century, and had by this time joined with both Bletchley and Simpson, being commonly considered a hamlet of the former.[2]

Invention of the Diesel Engine in Fenny Stratford

The world's first successful heavy oil engines were invented and built by Herbert Akroyd Stuart in Fenny Stratford.[3] There is a plaque commemorating this at the westerly end of Denmark Street in Fenny Stratford opposite The Foundry public house - though the location of Akroyd Stuart's workshop is usually given as "Bletchley", which is a larger town adjoining Fenny Stratford. These engines were precursors to what is now known as the Diesel engine: Rudolf Diesel based his designs (1892) on Akroyd Stuart's proven inventions (1890) of direct (airless) fuel injection and compression ignition. An experimental model was tried out at the offices of the Fenny Stratford Times Newspaper, and the first factory models were installed at the nearby Great Brickhill Waterworks where they were in operation from 1892 to 1923.[4]