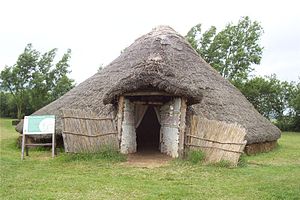 Flag Fen in north-westernmost Cambridgeshire, east of Peterborough, is a drained fen, part of the Great Fen, most famous for its rich collection of archaeological finds.

The fen contains a Bronze Age site, proposed to be a religious site for want of an explanation, which comprises over 60,000 timbers arranged in five very long rows (about a thousand yards) connecting Whittlesey Island with Peterborough across the wet fenland. Part way across the structure, a small island was formed which is where it is presumed that the chiefly or religious ceremonies were carried out. Dendrochronological dating provides a date of 1365–967 BC. There was great environmental change during this period. The land began to get wetter as there were more rainy seasons floods were common. People were losing the land on which they farmed to the fen, which must have been the cause of fear and confusion.

In the 10th century BC the ground level was much lower than today, increasing around 0.04 inches each year as autumnal debris is added to the surface of the fens. This caused the structure to be covered up and preserved. The anaerobic conditions found in the waterlogged soil prevented the timbers and other wooden objects from rotting away. The site was first discovered in 1982 when a team led by Francis Pryor carried out a field survey of dykes in the area funded by English Heritage.

Due to extensive drainage of the surrounding area, many of the timbers are drying out and are threatened with destruction. Archaeologists are studying it and there is a well-organised visitor centre there with museum and exhibitions. In the preservation hall one section of the timbers is preserved in-situ and prevented from drying out by misting with water. Also at the site are reconstructions of two Bronze Age roundhouses and one from the Iron Age. There is also an exposed section of the Roman road known as the Fen Causeway which crosses the site and a reconstruction of a Prehistoric droveway.

One section of the poles is being preserved by replacing the cellulose in the wood with water carried wax impregnating of the wood over the years. (This technique is also being used to preserve "Seahenge".) Another preservation technique used for timbers found at the site is freeze drying.

In the surrounding water of Flag Fen votive offerings have been found, for example daggers broken in half placed on top of each other. This supports the theory that Flag Fen was a site involved in religious rites, as great wealth was being thrown into the water. One theory, is that these were being given as votive offerings to the gods, to ask them to stop the environmental changes which were occurring around the time. Amongst the daggers and jewellery found, there were a number of small, white beach pebbles. These were not natural to the local area which suggests traded goods or that people travelled from afar to give offerings here. Other artefacts that were found comprised animal bones. Of these, horse mandibles were found. Horses were very valuable to the prehistoric people, as they provided not only a means of transport, but also man power. They could be used to carry timbers, for example, over long distances.

Some of the timbers themselves were not natural to the local environment, as few were made of oak. This means that the people who constructed this timber causeway wanted to use materials that perhaps had religious significance to their lives, and felt that it was worth the effort to transport the timbers from far lying sources to the site itself. This isn't rare in the prehistoric world, as the bluestones from Stonehenge were brought to the site in Salisbury from the Preseli Mountains in Pembrokeshire.

On the island known as Northey Island, many round barrows, contemporary with Flag Fen, were found. These seemed to be constructed over the dwellings of 'chiefs'. Mike Parker Pearson refers to this as the "Land of the Dead", although there is evidence of farming, including sheep remains, contemporary with the site. Phosphate analysis reveals high concentrations of cremations in the barrows, in the form of satellite and secondary burials in the round barrows. This suggests that the primary burials may have been of chiefs, or socially powerful/respected people, and that some people may have paid to be buried close to the person they respected or followed.