Felling is a town in the north of County Durham, falling within the conurbation spreading out from Gateshead and its neighbouring towns. It is one of the largest urban areas here beside Gateshead itself.

Felling was formed by the coalescing of three villages in the 19th century. Today barely divided from Gateshead, it is found on the B1426 Sunderland Road and the A184 Felling bypass, less than a mile east of Gateshead, and a mile from Newcastle upon Tyne. In 2012, Felling had an estimated population of 8,202.

Once a rural estate, a colliery was opened towards the end of the eighteenth century. Other heavy industry took root in the 18th and 19th centuries so that Felling developed from a rural scattering of villages into firstly three distinct settlements at Low and High Felling and Felling Shore, then in 1894 these amalgamated with other local villages into the town of Felling.

Felling today is broadly residential save some light industry located at the bank of the River Tyne in north Felling.

The history of Felling stretches almost eight hundred years: the name of Felling is recorded as early as 1217.

The original manor at Felling was granted in the 13th century and in 1331, the manor was granted to Sir Thomas Surtees by Bishop Lewis Beaumont. It descended through the Surtees families until the death of the last heir in 1509,[1] whereupon it was inherited by Brandling family after fiercely contested litigation resolved only by the division of the Surtees lands: Felling was granted by Deed of Partition to Robert Brandling and his heirs "for life and to the total extinction" of any other claims.[2].

Whilst Lords of the Manor, several members of the Brandling family served as Members of Parliament among other civic duties. They were also instrumental in bringing heavy industry to the area.

In the Civil War, the Brandlings fought for the King. Charles Brandling was a cavalry colonel. His elder brother, Ralph, was killed at the Battle of Marston Moor,[3] whilst the second brother, Robert, also participated in the English Civil War and was captured in an otherwise successful Royalist engagement at Corbridge in February 1644 after which he switched sides and fought for the Roundheads; an action which earned his the reputation as "a very knave" which he carried until his death in 1669.

By the turn of the 18th century, Felling consisted of little more than the large Brandling estate and a small scattering of tiny farming villages.[4] Ralph Brandling began drift mining on the estate around 1670,[4][5] finding large coal seams under his estate, but they proved difficult to extract due to their depth.

At around 1750, a large copper-works was opened at the banks of the River Tyne; the first such works to be developed on the river.[6][7] Encouraged by these developments, Ralph Brandling's son, Charles Brandling (1733–1802), commissioned more extensive mining of near-surface coal on his estate and then, began deep mining;[8][9] the Felling Colliery opened in 1779, working on the High Main stratum at a depth of 125 fathoms.[1][8] A brown paper mill was also opened in 1798.[6]

The Felling Colliery was one of the oldest and largest collieries in the region. In its history, the colliery was the site of two mining disasters which cost over one hundred lives. On 25 May 1812, despite having the most up to date safety measures in place, firedamp ignited to create "one of the most tremendous explosions in the history of coal mining took place".[1] Two explosions rocked the colliery, the blast appearing in both pits. A cloud of coal dust and debris over a radius of a mile and a half was ejected from the colliery.[10] One account recalled:

Immense quantities of dust and coal rose high into the air in an inverted cone...In the village of Heworth, this cloud caused a darkness like that of early twilight and covered the roads so thickly that the footsteps of passengers were deeply imprinted in it. As soon as the explosion was heard, wives and children of the workmen ran to the pit. Wildness and terror were pictured in every countenance. The crowd soon collected to several hundreds, some crying out for a husband, others for a parent or a son, and all affected by a mixture of horror, anxiety and grief.[11]

Twenty-nine men were saved, but the remaining 92 men and boys were killed.[1]

Just one year later, on 24 December 1813, a further catastrophe occurred:

About half-past one o'clock on the morning, an explosion took place in Felling colliery, by which nine men and thirteen boys were hurried into eternity, several others severely burnt, and all the under-ground horses but one destroyed. The accident occurred at the time of calling course, or when one set of men were relieving another. Several of the morning shift men were standing round the mouth of the pit, waiting to go down, when the blast occurred, and the part who had just descended met it soon after they had reached the bottom of the shaft; these were most miserably burnt and mangled.[12]

These events prompted the invention by Sir Humphrey Davey and George Stephenson of their safety lamps.

The coal staithes at Felling Shore

Felling continued to grow. There now existed three distinct villages: around two miles south-east of Gateshead lay High Felling, a residential village in the township of Heworth which had attracted several Wesleyan and Methodist preachers.[13] Slightly to the north was Low Felling, a more heavily industrialised village, containing Felling colliery, a large chemical works and other manufacturers,[13] though in 1834 it was noted that there also existed "a few neat houses and many cottages for the colliery which, with small gardens attached, give an aspect of comfort to the village".[1] At the north and on the bank of the River Tyne, a populous manufacturing and trading village had developed known as Felling Shore, spreading across three miles of the bank of the Tyne. A Methodist church was built there in 1805. This was accompanied by several shops and four public houses frequented predominantly by seamen and workers at the adjacent quay, coal staiths and ship building works where vessels of excellent quality were built.[7][13] Industry continued to flourish here; the copperworks established in the 18th century still operated and had expanded, an oil and a paper mill had also developed, along with forging works for anchors and shovels.[6]

In 1827 the Friars Goose Chemical Works was opened by Anthony Clapham. In 1834 a second large chemical works was established by Hugh Lee Pattinson, John Lee and George Burnett;[14] it soon employed around 300 men.[6][15] Grindstone quarries produced high quality stone and a brownware pottery under Mr. Joseph Wood had opened for business.[7] In 1842, Brandling Station was opened at Mullbery Street in Felling on the Brandling Junction railway linking Gateshead, South Shields and Sunderland.[16] This is one of the oldest passenger stations in the world.[17]

By around 1870, Felling had reached its industrial peak. Historian John Marius Wilson noted:

FELLING, a large village and a chapelry in Jarrow parish, Durham. The village stands on the Northeastern railway, 1½ mile SE of Gateshead; increased recently from two hamlets to its present condition; is maintained by factories and by mining operations; connects with Felling-Shore, a coal-shipping place on the Tyne; and has a post office under Gateshead, a r. station, a church built in 1866, four dissenting chapels, and a Roman Catholic chapel. The chapelry was constituted in 1866. Population 5,105. The living is a vicarage. Value, £300. Patrons, Five Trustees.[18]

By 1860, improvements to access along the River Tyne only served to highlight the better sites on the Tyne bank and so shipbuilding at Felling Shore began to decline. The limited space at Felling dock left it eclipsed by developments elsewhere.[19] At around the same time, the bigger, modern chemical plants outcompeted those at Felling counterparts.[19] As industry declined though there was continuous residential growth, so that by the Victorian era those industrial elements which survived were met by a large sprawl of housing from the south where High and Low Felling had effectively merged.[20]

In 1932 the large chemical works at Felling Shore closed and was left derelict, leaving behind a two million ton heap of spoil.[15] Felling Colliery, the oldest and most extensive of all Felling's industry, had changed hands numerous times after the Brandlings finally sold their stake in the 1850s and ultimately closed in 1931 with the loss of 581 jobs.[9] Fairs boat yard at Felling Shore had been sold in 1919 and became Mitchison's ship yard, but this too closed in 1964.[15]

In the inter-war years, whole derelict industrial areas were cleared and large council estates of semi-detached houses, with front and back gardens, were built at the Old Fold, Stoneygate, Brandling and Nest estates.[21] By the time that Felling ceased to be an independent town and was incorporated into the Metropolitan Borough of Gateshead in 1974, Felling had become a "dormitory area" and remains so today.[22] 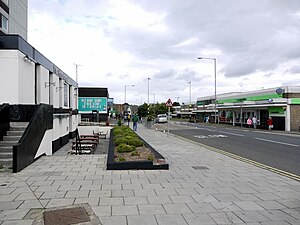 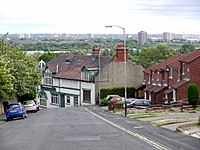 There are high levels of unemployment and deprivation in Felling, but it is well served by public transport; there are several bus services through the area and Felling lies on the Tyne and Wear Metro line.

Felling town centre remains the principal economic area though it has become dilapidated and is scheduled for regeneration. The long and rich history of the area is reflected by over a dozen listed buildings, several churches and numerous public houses which are locally listed.

The two principal economic areas of Felling are Felling Shore 9which has the East Gateshead Riverside Park and the Felling Shore industrial estate) and the town centre around Victoria Square, with the shops, banks and high street businesses. In early 2011, the council granted a long-term lease to developers The Felling Syndicate for the complete redevelopment of Felling High Street,[23] entailing a "complete demolition of the existing Felling shopping centre". 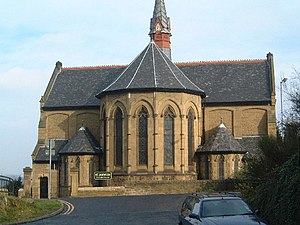 The Church of St Patrick, Felling

There is a King George V Playing Field in the town.

There are four principal parks. Arguably the most notable is Felling Park, a landscape park which envelops the old Town Hall buildings at the eastern end of Sunderland Road and the Holly Hill area. Opened in 1910, this park contains an open bandstand at the centre (but was taken down due to vandalism), tennis courts and a bowling green and a traditional children's play area.[26] In the area leading uphill from Sunderland Road to the park there are numerous bedding plants which "brighten up Sunderland Road every spring".[27]

Bede Community Park is a large, open space park at the centre of the council estate at Old Fold Road

Heworth Welfare Park is a smaller park to the south at Colpeth, which has an outdoor bowling green

Other leisure facilities include the Keelman's Way, a 14-mile designated cycle and walking route which stretches from Wylam station to Bill Quay and which passes along the riverbank at Felling Shore.[28] Named from the keelboats used to transport coal from the various collieries in the area, the route was extended into Newburn in 2012.

Also at Felling Shore are Friar's Goose Marina and the adjacent Friar's Goose Water Sports Club, a privately owned and increasingly popular club predominantly attended by middle-aged patrons who undertake various activities such as sailing, yachting and angling on the River Tyne.

Felling Cricket Club has been based at High Heworth Lane at Felling since 1961 and compete locally.

Journals, reports, articles and other sources

Where an abbreviation is used in the references this is indicated below in (brackets) at the end of the source name. When a source is available online, a link has been included.