The Fairbourne Railway is a 12¼" gauge railway running for 2 miles from the village of Fairbourne on the Merionethshire coast, alongside the beach to the end of a peninsula at Barmouth Ferry railway station, where there is a connection with the Barmouth Ferry across the Mawddach estuary to the seaside resort of Barmouth.[1]

The line has provided a service between Fairbourne village and Penrhyn Point since its opening in 1895 as a 2-foot narrow gauge horse-drawn construction tramway. It was converted in 1916 to 15-inch gauge, and again to its present gauge in 1986. Originally built to carry building materials, the railway has carried holidaymakers for over a hundred years. At its peak in the 1970s it was carrying in excess of 70,000 passengers a year.[2]

Following the construction of the Cambrian Coast Line in 1865 and the completion of the Barmouth Bridge in 1867 there were lavish schemes to develop the area for tourism, the area being easily accessible to day-trippers and weekend visitors from the Midlands.[3]

There were several horse-drawn construction tramways in the area serving the Henddol Quarry above the neighbouring village of Friog. The tramway that was used to construct the Fairbourne village soon introduced passenger cars to transport people to the ferry station. 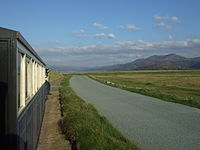 The line was converted to a 15-inch gauge steam railway in 1916 by Wenman Joseph Bassett-Lowke of Narrow Gauge Railways Ltd (NGR). They were keen to promote tourism in the area. The railway played an important part in the development of the 15-inch gauge railways in the United Kingdom. Services were operated by Bassett-Lowke Class 10 locomotive Prince Edward of Wales designed by Henry Greenly and passengers were conveyed in four open top carriages.

The railway had mixed fortunes during the inter-war years and went through a series of changes in ownership. At one time it was leased to the ferrymen. The railway experienced motive power problems and at one stage experimented with dual gauge track after purchasing an 18" gauge locomotive. This was a model of a GNR Stirling 4-2-2. A third rail was laid as far as the Golf Course.

The line closed in 1940 after operating its final year with Whippit Quick, a Lister 'Railtruck' petrol locomotive, as the steam locomotive Count Louis was out of service.

The railway was rescued by a consortium of businessmen from the Midlands in 1946 and after rebuilding, was reopened by 1947. The line's owner John Charles Wilkins (of Wilkins & Mitchell, Darlaston), funded the redevelopment of the railway and the purchase of new steam locomotives. The line's heyday was in the 1960s and early 1970s but the advent of mass foreign holidays meant there was a steady decline in passenger numbers during the 1970s and 1980s. 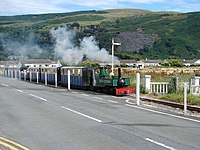 In 1990 the railway built their first steam locomotive, Number 24, a replica of a locomotive from the Sandy River & Rangeley Lakes Railroad in Maine in the United States. The locomotive has since left the line and now operates on the Cleethorpes Coast Light Railway in Lincolnshire.

The railway was again put up for sale in 1990 and the line's fortunes appeared to be declining once more. During the five years it was up for sale the railway deteriorated dramatically.

Professor Tony Atkinson and Dr Roger Melton bought the line in April 1995, they and their wives Mrs Maureen Atkinson and Mrs Amanda Melton being appointed directors. There was considerable investment in the railway to improve reliability of the locomotives and the quality of the track, and a new attraction, the Rowen Centre, was set up at Fairbourne station. In 2007 some of the displays were changed to accommodate a large G scale model railway which is gradually being added to and improved by local model engineers.[4]

In 2008 ownership of the railway was transferred to a charity, the North Wales Coast Light Railway Limited (Registered number 1127261). Professor Atkinson subsidised the railway's operation but the subsidy was withdrawn after he died on 19 June 2011, leaving the railway's future in doubt.[5] With reductions in staff and by the encouragement of donations the railway has been able to continue in operation.[6]

For hundreds of years the ferry has been providing a crossing service over the Mawddach estuary and was originally operated by monks. In recent years it has been operated by independent operators. During the summer of 2007 the Railway Company acquired a ferry boat and commenced operating its own ferry service in July 2007. The new ferry boat "Y Chuff" was bought to ensure that a reliable service across the harbour to Barmouth would operate even during quiet periods of the season.[8]

Steam locomotives haul most of the passenger services, some of the locomotives are approximately half-size replicas of famous narrow gauge prototype locomotives such as the Class B Tanks from the Darjeeling Himalayan Railway and the Manning Wardle Tanks of the Lynton and Barnstaple Railway.