Inverkeithing is a town and a royal burgh in Fife, sitting on the Fifeshire coast on the Firth of Forth. According to population estimates (2006), the town has a population of 5,265. It is about 9 miles north of Edinburgh Airport and about 4 miles from the centre of Dunfermline. Modern Inverkeithing is almost continuous with Rosyth and Dalgety Bay.

The town is a port and has been since time immemorial. It was given burgh status by King David I (1124–53) in the 12th century. In the modern age it became a shipbreaking centre and today it is a developing town and has many new housing sites including one next to the town's railway station.

The name is of Gaelic origin; Inbhir Céitein means "mouth of the Keithing/Ceitein". The Keithing is the name of a small river or burn that runs through the southern part of the town. Taylor (2006) notes that the name Keithing probably contains the Pictish *coet menaing "wood" (the Welsh coed), so the Keithing burn would have meant 'woodland burn'.[1] 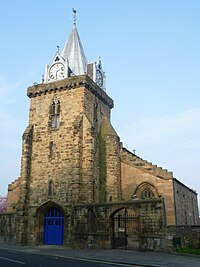 The parish church of St. Peter stands in its large churchyard on the east side of Church Street. The main part of the church is a large plain neo-Gothic 'preaching box' of 1826-27, but the western tower is 14th century. The traceried belfry openings are unusual. Built of soft sandstone, the tower is very weathered, and has been partially refaced. It is crowned by a lead spire with over-emphatic gabled dormers housing clock-faces (1835 and 1883).

The church's roomy interior (now deprived of its galleries) is graced by a little-known treasure, one of the finest mediæval furnishings to survive in any parish kirk: this is the large, extremely well preserved, grey sandstone font of about 1398, which was rediscovered buried under the church, having been concealed at the Reformation. Its octagonal bowl is decorated with angels holding heraldic shields. These include the royal arms of the King of Scots, and of Queen Anabella Drummond (d.1401), the consort of King Robert III (1390–1406). The high quality of the carving is explained by its being a royal gift to the parish church, Inverkeithing being a favourite residence of Queen Anabella. 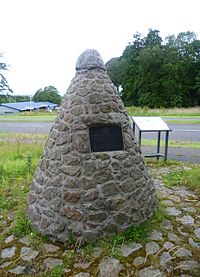 The town was the last place that Alexander III (1241–86) was seen before he fell off his horse at Kinghorn. Some texts have said that he fell off a cliff. Although there is no cliff at the site where his body was found there is a very steep rocky embankment - which would have been fatal in the dark.

The town museum (open in summer) is housed in a late mediæval building which was part of the claustral ranges of the town's Franciscan friary. This is one of the few remnants of a house of the Conventual Franciscans or 'Greyfriars' to have survived. In the garden behind the museum, some stone vaults survive which were probably storage cellars associated with the friary.

The Battle of Inverkeithing (20 July 1651) was fought on two sites in the area, one north of the town close to Pitreavie Castle, the other to the south on and around the peninsula of North Queensferry and the isthmus connecting it to Inverkeithing. The battle took place during Oliver Cromwell's invasion of Scotland following the Third English Civil War. It was an attempt by the English Parliamentarian forces to outflank the army of Scottish Covenanters loyal to King Charles II at Stirling and get access to the Highlands. This was the last major engagement of the Wars of the Three Kingdoms and led to Scotland passing into Cromwell's control. Cromwell's troops crushed the Scots, forcing them to abandon Stirling and march south to support Charles II. Of the estimated 800 Maclean clansmen who fought in the battle, only 35 were said to have survived. The Pinkerton Burn was said to have run red with blood for days afterwards. This was a significant episode in the history of Clan MacLean, and the 20th century poet Sorley MacLean mentions Inverkeithing in one of his poems.

The Russian admiral Samuel Greig was a native of Inverkeithing.

Inverkeithing is famous for its shipbreaking (Thos. W. Ward) yard. The second RMS Mauretania and the hull of the RMS Olympic were dismantled here. 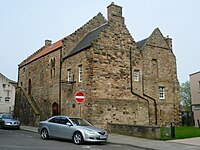 Hospitium of the Grey Friars 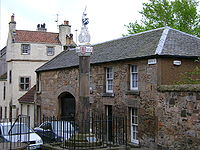 The heart of the mediæval town is around the High Street and Church Street.

The Hospitium of the Grey Friars is on the High Street, a category A listed building and the best surviving example of a friary building left in the north.

The town also contains one of the finest examples remaining of a mercat cross in Scotland.[2] The cross is said to have been built as a memorial for the marriage of the Duke of Rothesay with the daughter of the Earl of Douglas.[2] Originally, the cross stood on the north end of the High Street, before moving to face the tolbooth and then to its present site at the junction between Bank Street and High Street, further up the road.[2][3][4] The core of the mercat cross is said to date from the late 14th century with the octangonal shaft from the 16th century.[2][3] Two of the shields on the cross bear the arms of Queen Annabella Drummond and the Douglas Family.[2] Later, a unicorn and a shield depicting the St Andrew's Cross were added in 1688, the work of John Boyd of South Queensferry.[2][4]

Thomsoun's House on Bank Street, between numbers 2-4, is an impressive house which dates from 1617 and was reconstructed in 1965.[3]

Inverkeithing (St Peter's) Church on Church Street was first built as a wooden native church before being adapted into a Norman stone structure, which was bequeathed by the monks of Dunfermline Abbey in 1139.[2] The church suffered a fire in 1825 and was re-built in its present form in 1826.[2] Later, the church was restored in 1900.[2] Only the tower dating from the 14th century remains from the pre-reformation church building.[2]

Fordell Lodgings dates from 1671, and stand opposite St Peter's. They are A-listed. This is an L-plan tower house known as and was built by Sir John Henderson of Fordell.[2]

Rosebury House (B-listed) is on King Street. It is a 16th-century house though much altered, and was once owned by the Rosebury family.[2] The house was formerly called 'toofall' by the Earl of Dunbar, before being purchased by the Earl of Rosebury.[2]

Inverkeithing Tolbooth on Townhall Street (A-listed) displays the old town coat of arms, above the front door.[2][3] The renaissance tower, located at the western end of the building, is the oldest part of the tolbooth dating from 1755.[4] A three-storey classical building followed in 1770 as a replacement for the previous tolbooth.[4] This consists of a prison or the 'black hole' on the ground floor; the court room on the middle and the debtors' prison on the top.[4]

Inverkeithing is bypassed by the M90 motorway. The M90 links Fife to the Lothians and Edinburgh by way of the Forth Road Bridge. The town is also served by Inverkeithing railway station, a hub for the rail network to and from Fife. Passengers travelling to Edinburgh are carried over the Forth Rail Bridge.

Inverkeithing and its hinterland are also served by the Ferrytoll Park and Ride, off Hope Street, which provides car parking and access to bus services to Edinburgh city centre, South Gyle, Edinburgh Airport, Livingston and many parts of Fife.

Ships broken up at Inverkeithing 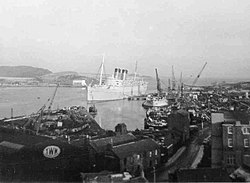 The Mauretania arrives at Inverkeithing, 1965