Eckington is a town and parish in north-east Derbyshire, seven miles north-east of Chesterfield and 8½ miles south-east of Sheffield close to the border with Yorkshire. The ancient parish forms part of the hundred of Scarsdale. The town itself lies on the B6052 and B6056 roads close to the A6135 for Sheffield and Junction 30 of the M1. It had a 2001 population of 11,152,[1] increasing to 11,855 (including Bramley , Renishaw and Troway) at the 2011 Census.[2]

Ten Roman coins discovered in December 2008,[3] near Eckington Cemetery may be evidence of a Roman settlement or road in the area. The oldest of the silver and copper coins is from the reign of the emperor Domitian (AD 81 to 96) while the others are from the reigns of Trajan (AD 98 to 117) and Hadrian (AD 117 to 138).

Eckington is recorded in the Domesday Book in 1086 as Echintune,[4] a manor given to Ralph Fitzhubert.[5] Some parts of the parish church of St Peter and St Paul date to 1100.

George Sitwell, son of George and Mary was baptised in 1601 in Eckington. George's father died whilst he was a child but as an adult he acquired the freehold of land in Eckington[6] and exploited it by mining iron ore.[7] In 1625, he built Renishaw Hall which is now owned by Sir Reresby Sitwell's daughter, Alexandra and her family.

Sitwell exploited the minerals beneath his estate, chiefly iron and built a blast furnace at Plumbley a mile north west of Eckington in the 1630s with his mother's second husband, Henry Wigfall. In 1652 Sitwell built a furnace at Foxbrooke, close to Renishaw, which became the core of the largest ironworks in Derbyshire. Sitwell made saws at Pleasley and in 1656, installed a rolling and slitting mill at Renishaw to supply the rod iron used by numerous local nailmakers.[7]

During the Industrial Revolution coal and iron ore were mined and local streams, such as the Moss Brook, were harnessed to provide power for factories. The Sitwells built a large foundry and ironworks. Scythes, sickles and nails were made in the town for local use and for export.[8] The Moss Brook was dammed to provide water power at eight sites including ChapelWheel, Carlton Wheel and Fields Wheel, to grind the blades. The remains of an old forge and drift mines exist in the valley.[9] Eckington had a coal mine in the eastern part of the town, one of the very few in the country which is still operated.

In November there was a hiring fair for servants.[8]

Eckington covers an area of 2,089 acres. The geology is the coal measures containing coal and ironstone. The Chesterfield Canal and Midland Railway passed through the parish.[8] The Moss Brook is a tributary of the River Rother.

The oldest school in Eckington is Camms CE Primary School. In 1702, Thomas Camm endowed a schoolhouse and a schoolmaster to teach 24 poor children in the parish. In 1832, Robert Harrison moved the school to a new building which cost £600, and it was moved again to its current location on Castle Hill in 1975.[10]

Eckington School, is a large comprehensive school, attracting pupils from the surrounding areas of Killamarsh, Renishaw, Beighton, Ridgeway and Mosborough. Despite being closer to several Sheffield residential areas the admissions policy favours pupils from Derbyshire feeder schools.[11] It is a designated specialist engineering college. Eckington Grammar School in Halfway became Derbyshire's first comprehensive school in 1957, changing its name to the Westfield School, and since 1967 has been controlled by the city of Sheffield.

Located on the border between Yorkshire and Derbyshire, Eckington and other towns such as Killamarsh, Mosborough and Ridgeway have their own local accent, a cross between the Sheffield (as opposed to Yorkshire) and Chesterfield accents. The influence of the Sheffield accent is the more strong.

Eckington has a swimming pool[12] near the library,[13] built in the 1970s as part of a town centre improvement. The town has a bus station (halt).

Eckington Woods to the west of the town forms part of the Moss Valley conservation area. They are also known as the Bluebell Wood because of the quantity of bluebells in the springtime. 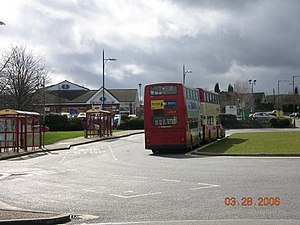 Eckington bus station serves Eckington and is on Pinfold Street. It has four stands and two rest stands.

Notable people from Eckington include: