East Falkland is the largest and most populous of the Falkland Islands in the South Atlantic. It has an area of 2,550 square miles and a heavily indented coastline 1,037 miles long.

The island consists of two parts, joined only by a narrow isthmus, the northern part being where almost all of the island's population live. The southern half, Lafonia, is devoid of settlements. The isthmus between the two became famous during the Falklands War as the place of the Battle of Goose Green.

Lafonia consists chiefly of low undulating ground, a mixture of pasture and morass, with many shallow freshwater tarns, and small streams running in the valleys.

The geology is mostly sandstone, with some quartzite and slate, and the soil often poor and acidic. Two fine inlets, Berkeley Sound and Port William, run far into the land at the north-eastern extremity of the island.

The island is almost bisected by two deep fjords, Choiseul Sound and Brenton Loch-Grantham Sound which leaves the northern portion and Lafonia in the south, connected only by an isthmus just under a mile and a half wide. The island contains many smaller bays, inlets and headlands.

Other scenery includes stone runs, heathland, and bogs. Gypsy Cove is noted as a beauty spot. 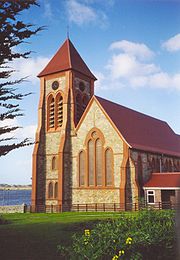 Stanley, the capital of the islands and their main seaport is on the south shore of Stanley Harbour at the north-east of East Falkland. The islands' cathedral and indeed all the churches of the islands are also in Stanley.

Port Louis, at the head of Berkeley Sound, was once the seat of government. However, the anchorage there was found to be rather too exposed and about 1844 a town was laid out, and the necessary public buildings were erected on Stanley Harbour, a sheltered recess within Port William.

East Falkland has two airports with paved runways; Port Stanley Airport and RAF Mount Pleasant. There is a lighthouse at Cape Pembroke near Stanley. As it has the population, East Falkland also has most of the archipelago's few roads. 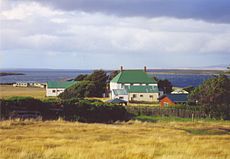 The main industries on the island are fishing, sheep farming, government, and tourism. Some oats are also grown, but due to high humidity and acidic soil, the land is mainly used for grazing.

As Stanley is the capital, and East Falkland is the most populous island, it performs an economic role as the hub of the archipelago. Many cruise ships now stop there.

A large economic role is also played by RAF Mount Pleasant, which has a number of British military personnel based there. Although these number a few hundred, their economic role in a population of fewer than two thousand cannot be underestimated.

Smaller industries include horse and cattle farming, and there is also recent evidence to suggest possible valuable mineral deposits on the island. 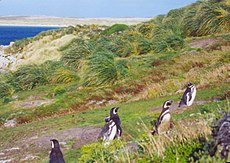 Due to more intensive human settlement, East Falkland has the corresponding conservation problems. The warrah was one of the first casualties, as Charles Darwin says in The Voyage of the Beagle:

The only quadruped native to the island is a large wolf-like fox (Canis antarcticus), which is common to both East and West Falkland. I have no doubt it is a peculiar species... Their numbers have rapidly decreased; they are already banished from that half of the island which lies to the eastward of the neck of land between St. Salvador Bay and Berkeley Sound. Within a very few years after these islands shall have become regularly settled, in all probability this fox will be classed with the dodo, as an animal which has perished from the face of the earth.

Rats have also been introduced, but despite this, the island has a great deal of marine life, including penguins of various kinds.

Guanacos were unsuccessfully introduced in 1862 to East Falkland south of Mt Pleasant where Prince Alfred hunted them in 1871. They have since become extinct on East Falkland, but are still on Staats Island

We anchored a little after sunset off a creek called 'Johnson's Harbour'. The day having been cloudy with occasional showers, these islands at all times dreary enough, looked particularly so on our first view of them, the shores of the sound, steep, with bare hills intersected with ravines rising from them, these hills without a tree and the clouds hanging low, gave them exactly the appearance of the Cheviots or a Scotch moor on a winter's day and considering we were in the May of these latitudes, the first impression of the climate was not favourable, the weather however, was not called, the thermometer was 63 degrees which is Howick mid-summer temperature.

In 1845 Mr Samuel Fisher Lafone, a wealthy cattle and hide merchant trading on the River Plate]], obtained a grant of the southern portion of the East Falkland from the British government, He purchased this peninsula, 600,000 acres in extent, together with possession of all the wild cattle on East Falkland for a period of six years, for a payment of £10,000 down, and £20,000 in ten years from 1 January 1852. In 1851 the Falkland Islands Company, which had been incorporated by charter in the same year, bought Mr Lafone's interest in Lafonia, as the peninsula came to be called, for £30,000. Lafone himself never visited the islands. The remnants of this endeavour are the ruins at Hope Place and the stone corral at Darwin.

Although used for sheep farming since the early nineteenth century, East Falkland was dominated by cattle farming until the 1850s.

In 1925 the Bodie Suspension Bridge was built across a creek in Lafonia, and is said to be the southernmost in the world, and is still in pedestrian use today.

Following the Falkland War, Britain increased its military presence on the East Falkland and invested heavily in improving facilities in Stanley and transportation around the islands, tarmacking many roads. The population has risen, due to the growth of Stanley, but has declined in the Camp. Most of the improvements in the islands have taken place on East Falkland.