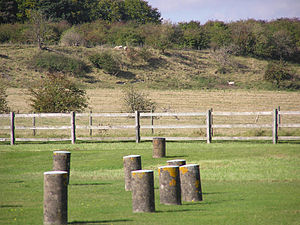 Durrington Walls is the site of a large Neolithic settlement and later 'henge' enclosure on Salisbury Plain in Wiltshire. It is part of the broad Neolithic landscape of Wiltshire which has been designated a World Heritage Site by the name the 'Stonehenge, Avebury and associated sites' .

Durrington Walls is to be found two miles north-east of Stonehenge in the parish of Durrington, just north of Amesbury, and beside another of the sites of Neolithic Wiltshire: Woodhenge.

Between 2004 and 2006, excavations on the site by a team led by the University of Sheffield revealed seven houses. It has been suggested that the settlement may have originally had up to 1000 houses and perhaps 4,000 people, if the entire enclosed area was used. The period of settlement was probably short, between 15 to 45 years starting at some time between 2525 and 2470 BC.[1]

This may have been the largest village in northern Europe for a brief period.[2][3][4] At 550 yards in diameter, the ditch and bank enclosure is the largest in Britain, and recent evidence suggests that it was a complementary monument to Stonehenge.[5]

In 2015, discovery of another monument, consisting of up to 90 standing stones buried under Durrington Walls, was announced.[6]

What visibly remains of Durrington Walls today is the 'walls' of the henge monument – in fact the eroded remains of the inner slope of the bank and the outer slope of the internal ditch. This now appears as a ridge surrounding a central basin. On the eastern side the separate ditch and bank are much more discernible although badly eroded by ploughing. Originally the ditch was some 18 feet deep, 23 feet wide at its bottom and 59 feet wide at the top. The bank was in some areas 100 feet wide. There were two entrances through the bank and ditch – at the north western and south eastern ends. There may also have been an entrance to the south and the north east, although these may have been deliberately blocked. The henge enclosed several timber circles and smaller enclosures – not all of which have been excavated. Several Neolithic house floors have been found next to and under the eastern bank of the henge. Their density suggests that there was a very large village on the sloping river bank on this side.

The enclosure sits on high ground that slopes south east toward a bend in the River Avon, and is thus considerably higher at its north western side than at its south eastern edge. The south eastern entrance is roughly 200 feet from the riverbank.

The henge has two roads passing through it – an old toll road, and a modern banked road constructed in 1967. In the past military barracks were constructed at the north eastern end of the henge, and some houses are constructed on the western bank. The land on the western side of the toll road is owned by the National Trust, forming part of its Stonehenge Landscape property. It has free entry.

Although there is evidence of some early Neolithic activity at the site, most of the structures seem to have been built in the late Neolithic/early Bronze Age. At some point c. 2600 BC, a large timber circle was constructed. It is now known as the Southern Circle. The circle was oriented southeast towards the sunrise on the midwinter solstice and consisted of four large concentric circles of postholes, which would have held extremely large standing timbers. A paved avenue was also constructed on a slightly different alignment – towards the sunset on the summer solstice – that led to the River Avon. This feature is similar to the Stonehenge Avenue. A large timber post lay on this orientation, about as far away from the circle as the Heelstone is from Stonehenge.

At a similar time, but probably after the circle and avenue were constructed, a village began to develop around the site. Excavations have revealed seven Neolithic house floors on the eastern side of the bank. Some of these floors were located underneath the henge bank, suggesting that settlement came first. The density of some of the houses suggests that there are many more house floors under the field east of the henge, along the banks of the River Avon. One of the homes excavated showed evidence of a cobb wall and its own ancillary building, and was very similar in layout to a house at Skara Brae in Orkney. The other houses seem to have had simple wattle and daub walls. Evidence also suggests that the houses continued to the north of the site. 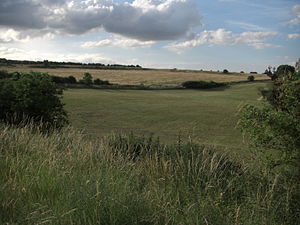 Durrington Walls from the south of the monument

It is probable that the village surrounded a large, circular, open area that contained the Southern Circle and several smaller enclosures. A geophysical survey of the area 200 yards west of the Southern Circle, known as the western enclosures, showed "a group of at least six penannular structures ...arranged around a terrace overlooking the timber circle and the eastern entrance". An excavation revealed two houses set within timber palisades and ditched enclosures that appear to have been kept clean. Julian Thomas notes that; "Overall, the evidence from the internal structures at Durrington Walls does not show that this was a ‘ritual site’, for there is no such thing. There are simply sites at which ritual has taken place, and at Durrington a variety of acts of various degrees of ritualization, from formal rites to habitual practices, were woven into a complicated history, marking moments of crisis, transformation, and daily routine."[7]

At some time later, perhaps 200 years after the circle was first constructed, another two concentric rings were added, and the henge enclosure was constructed. A ditch some 18 feet deep was dug, and the earth used to create a large outer bank some 30 m wide and presumably several feet high. Several features of the village, including houses and midden pits, were built over. The henge seems to have been built in one continuous operation, not in phases, as there is no evidence of soil or turf developing in the bank. The ditch also seems to have been dug in sections, perhaps by different groups of labourers. Estimates of the number of people required to create the ditch and bank vary from 4000 to 6000. At a similar time, another large timber circle and henge were created immediately south at Woodhenge.

It is unknown when the site fell out of use. It was re-occupied during the Iron Age, when a settlement and field system was established inside the henge. A large drainage ditch was also dug above the north eastern entrance, possibly to complement the field system.

Richard Colt Hoare noted Durrington Walls in 1810, and observed that centuries of agriculture had left "its form much mutilated".[8] Geoffrey Wainwright excavated the route of the new A345 in 1966. He discovered the southern timber circle as well as a smaller one slightly north of it. Since 2003 the Stonehenge Riverside Project, led by Mike Parker Pearson, has carried out annual excavations at Durrington Walls. It identified the Neolithic village and avenue to the river.

Radiocarbon dates of approximately 2600 BC are roughly contemporary with the earliest stone phase at Stonehenge. It is likely that the builders of the stone monument lived here. Mike Parker Pearson believes that Durrington Walls was a complementary structure to Stonehenge, as evidenced by the similar solstice alignments. He suggests that the timber circle at Durrington Walls represented life and a land of the living, whilst Stonehenge and the down around it, encircled by burial mounds, represented a land of the dead. The two were connected by the River Avon and their respective avenues. A ceremonial procession route from one to the other represented the transition from life to death.

Geoff Wainwright and Timothy Darvill have contested Parker Pearson’s theories, however; they suggest that Stonehenge was a monument to healing and that connections between the two monuments were unlikely.