Dublin Airport ((IATA: DUB, ICAO: EIDW)) is the international airport serving Dublin. It is laid out in Collinstown in County Dublin, four and a half miles north of the city itself and two miles south of the town of Swords.

The airport is owned by the Irish Government and is operated by DAA, which was formerly the Dublin Airport Authority.[1] In 2019, 32.9 million passengers passed through the airport, making it the airport's busiest year on record. It is by far the busiest airport in the Republic of Ireland by total passenger traffic and traffic levels.

The airport has an extensive short and medium haul network, served by an array of carriers, as well as a significant long-haul network focused on North America and the Middle East. It serves as the headquarters of Aer Lingus, regional airline Stobart Air, Europe's largest low-cost carrier – Ryanair, and ASL Airlines Ireland, together with another two airlines, CityJet and Norwegian Air International.

United States border preclearance services are available at the airport for passengers bound for the United States of America: Shannon Airport is the only other airport in Europe to offer this facility. 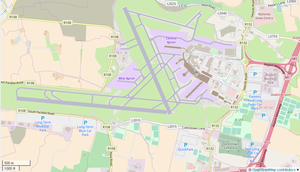 Map of Dublin Airport (before the construction of runway 10L/28R)

In 1917, during the First World War, the townland of Collinstown was selected as the site of a base for the Royal Flying Corps. By April 1918, when the Flying Corps was renamed the Royal Air Force, 'Collinstown Aerodrome' was more than 20% complete. Construction was completed in 1919 when the Irish War of Independence broke out. On 20 March 1919 a group of 30 Irish Volunteers, including five employed by the RAF, stole 75 rifles and 5,000 rounds of ammunition from the base.[2] As Collinstown Camp the site was used for internment of Irish republicans.[3]

At the end of 1922 the land and buildings at Collinstown were transferred to the Irish Free State. The airfield quickly fell into disrepair and grass grew on the former runways.[4]

In 1936, the Executive Council of the Irish Free State established a new civil airline, Aer Lingus, which began operating from the military aerodrome, Casement Aerodrome, at Baldonnel to the southwest of Dublin. A decision was made that a civil airport should replace Baldonnel as Dublin's airport. The former Collinstown site, extended into the neighbouring townlands of Rock and Corballis, was chosen.

Work on the new airport began in 1937. By the end of 1939, a grass airfield surface, internal roads, car parks and electrical power and lighting were set up. The inaugural flight from Dublin took place on 19 January 1940 to Liverpool. In August 1938, work began on a new airport terminal building. The terminal building was designed by architect Desmond FitzGerald, brother of politician Garret FitzGerald.[5] FitzGerald, who had designed an airport terminal as part of his college studies, led a team of architects that also included Kevin Barry, Daithí Hanley, Charles Aliaga Kelly, Dermot O'Toole and Harry Robson. The terminal building opened in early 1941, with its design heavily influenced by the tiered structure of the luxury ocean liners of the time. The terminal was awarded the Triennial Gold Medal of the Royal Hibernian Institute of Architects in 1942 and is today a listed building.

Due to the Second World War II (which was known as 'The Emergency' in Ireland) services were severely restricted at Dublin Airport until late 1945. The only international scheduled routes operated during this time were by Aer Lingus to Liverpool (and for a period to Manchester's Barton Aerodrome). The end of the war meant the beginning of a major expansion in services at the airport. Aer Lingus resumed its London service to Croydon in November 1945. In 1947, KLM started the first European flights to Dublin with a service to Amsterdam. Three new concrete runways were completed in 1948, and in 1950 - after ten years in operation - the airport had welcomed a total of 920,000 passengers.[6]

Throughout the 1950s Dublin Airport expanded with virtually uninterrupted traffic growth. Runway extensions and terminal enhancements were carried out to deal with the influx of traffic and passengers. New airlines began serving the airport also. These included British European Airways, Sabena, and BKS.[7]

In 1958, a new transatlantic service was started by Aer Lingus via Shannon Airport. By the mid-1950s, it was clear that the original terminal building was too small to cope with growing passenger numbers. A new North Terminal was opened in June 1959. Originally, the plan was that North Terminal would handle all US and European flights, but instead, it became the arrivals terminal for all Dublin Airport passengers, while the original passenger terminal was used for departures.[6]

During the 1960s, the number of scheduled carriers continued to grow. By the close of the 1960s, a sizeable number of Boeing 737s, BAC One-Elevens, Boeing 707s and Hawker Siddeley Tridents were using the airport regularly. To cope with larger aircraft in the late 1960s new departure gate piers were added close to the old terminal to cope with larger aircraft.[6] These piers would subsequently be connected to Terminal 1. During 1969, the airport handled 1,737,151 passengers.[7]

The advent of wide-body aircraft posed opportunities and challenges for aviation. In 1971, Aer Lingus took delivery of two new Boeing 747 aircraft; the first one arrived in March and, shortly afterwards, performed a flyover above O'Connell Street in Dublin on Saint Patrick's Day; a third Boeing 747 was delivered later that decade. To cope with this, a new £10 million passenger terminal capable of handling six million passengers per year, which became known as Terminal 1, was opened in June 1972.[6] The growth which was anticipated at Dublin's airport (and provided for through heavy investment by the airport and Aer Lingus) during the 1970s did not materialise immediately.

On 30 November 1975, one person was killed and eight others were injured when the airport was bombed by the Ulster Defence Association.[8]

In 1983 Aer Lingus opened its 'Aer Lingus Commuter' division[9] which took delivery of Shorts, Saab AB and Fokker turboprop aircraft to open regular daily domestic services to and from Ireland's smaller regional airports for the first time, as well as to serve existing routes to smaller regional airports in the United Kingdom. At various stages of its operations, flights were operated to several Irish regional airports to feed passengers into Aer Lingus's international network. These domestic destinations included Cork Airport, Shannon Airport, Kerry Airport, Galway Airport, Ireland West Airport Knock, Waterford Airport, Sligo Airport and City of Derry Airport. Aer Lingus Commuter has since been re-absorbed into the main company. The domestic routes, with the exception of Dublin-Shannon, were taken over by Aer Arann. Most of these routes have since been discontinued as the development of the motorway network in Ireland has resulted in significant reductions in travelling time by road. Aer Lingus has continued with the remaining Dublin–UK flights.[7]

During the 1980s, major competition, especially on the Dublin–London routes, resulted in passenger numbers swelling to 5.1 million in 1989. In the same year a new 8,650-foot runway and a state-of-the-art air traffic control centre were opened. Dublin Airport continued to expand rapidly in the 1990s. Pier A, which had been the first extension to the old terminal building, was significantly extended. A new Pier C, complete with air bridges, was built and as soon as this was completed, work commenced to extend it to double its capacity. The ground floor of the original terminal building was returned to passenger service after many years to provide additional departure gates. Pier D, completed in October 2007, is a dedicated low-fares boarding area and provides 14 quick turn-around stands and departure gates; these are not served by air bridges.[7]

In 1993, a major milestone for the airport was the signing of a new United States – Ireland bilateral agreement which allowed airlines to operate some direct transatlantic services for the first time to/from Dublin Airport instead of touching down en route at Shannon Airport on the west coast of Ireland. (Shannon had once been a major transatlantic refuelling stop for pre-jet aircraft, and this agreement was designed to protect the interests of the Shannon region when modern jets no longer required a refuelling stop and Shannon saw a fall-off in traffic.) Airlines still had to provide an equal number of flights either to or through Shannon as to Dublin. A gradual further watering down of Shannon's so-called 'stopover' status came into effect in November 2006 when more direct flights to Dublin were allowed. The stopover requirement disappeared completely in 2008. At that time, airlines were allowed to fly direct to the US from Dublin without having to match these with any to/from Shannon. It was expected that this would result in a huge increase in services between Dublin and the US and Aer Lingus has identified 16 destinations that it would like to serve directly from Dublin.

With the success of Ireland's 'Celtic Tiger' economy, Dublin Airport saw growth in the 1990s and 2000s. This demand was driven by an increased demand for business travel to and from the country, together with an increase in inward tourism and a surge in demand for foreign holidays and city breaks.[10]

In August 2019, Dublin Airport was chosen for the Special Achievement in Geographic Information Systems (GIS) award for its use of mapping software from ESRI Ireland.[11]

As of August 2019, there are services to 31 intercontinental destinations from Dublin Airport (not including Anatolia).[12] In 2007, Etihad Airways began operating between Dublin Airport and Abu Dhabi, and increased its capacity to 14 weekly flights in March 2010. In addition, Emirates has served Dublin from Dubai since January 2012. A total of 22 cities in North America are connected directly to Dublin Airport by seven airlines. In 2015, Ethiopian Airlines began serving Dublin from Addis Ababa, thus inaugurating the first direct air link between Ireland and Sub-Saharan Africa.

In 2018, Cathay Pacific launched 4-weekly direct flights between Dublin and Hong Kong. This was followed by services to Beijing-Capital (via Edinburgh) and Shenzhen (nonstop), launched by Hainan Airlines in June 2018 and January 2019, respectively.[13] In August 2019, however, Hainan Airlines withdrew from Dublin entirely.[14] In September, due to the ongoing political unrest in Hong Kong, Cathay Pacific restricted its previously year-round Hong Kong route to the summer season only.[15]

Aer Lingus, Ryanair, CityJet, Eirtech and Dublin Aerospace have aircraft maintenance hangars and facilities at Dublin Airport. In 2010 Etihad Airways announced a new maintenance hangar which will handle the Airbus A330-200 which the airline uses on their route from Abu Dhabi to Dublin. In time the airline will allow other airlines to use this facility.[16] 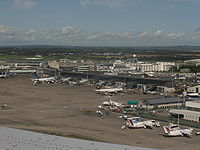 Main Apron seen from the air

In March 2009 the DAA announced in a proposal for consultation that the new runway may be built to a length of 12,008 feet following consultation with potential long-haul carriers. A runway of this length would allow direct flights from Dublin to the Far East.[19] The runway was expected to cost in the region of €300 million.

In the meantime, the company has invested heavily in extending aprons and creating rapid exit taxiways to derive maximum efficiency from the existing main runway. Runway 16/34 is often used during the day as a taxiway for aircraft utilizing runway 10R/28L. 16/34 is often used in the evening, depending on airport construction.