Cork Airport ((IATA: ORK, ICAO: EICK)) is the second-largest of the three principal international airports in the Republic of Ireland, after Dublin and ahead of Shannon. It is four miles south of Cork city centre in an area known as 'Farmers Cross'.[1]

Cork is also the state's second-busiest airport in terms of passenger numbers, after Dublin.

With an elevation of 500 feet above sea level, Cork Airport is sometimes prone to fog and a low cloud ceiling. The Instrument landing system has been upgraded to Category II, and together with a 1,000-foot extension of the main runway has significantly reduced the number of diversions. However, during times of severe inclement weather the airport can suffer from delays or diversions to airports such as Shannon, Dublin or Kerry. Similarly, diversions from these airports occasionally land at Cork.

The length of the main runway dictates that the airport cannot handle fully laden large widebody aircraft. Large wide-bodied aircraft do visit Cork Airport on an irregular basis, for example to operate ad-hoc charter services for flights to sporting events such as those of the Munster Rugby team.

In 1957 the Government of Ireland agreed in principle to the building of an airport for Cork. After considering many sites in the area, it was agreed that the airport should be built at Ballygarvan. Tenders were invited for the construction of the airport in 1959 at an estimated cost of £1 million. The airport was officially opened on 16 October 1961, following proving flights four days earlier by Aer Lingus and Cambrian Airways.

In its first year the airport handled 10,172 passengers – close to the average number of passengers handled each day at the airport in 2007. Throughout the 1960s the airport expanded with the arrival of more advanced aircraft and more destinations. The first jet, a British Overseas Airways Corporation Comet, landed at Cork Airport on 29 March 1964. By 1969 Aer Lingus was operating to London Heathrow, Manchester and Bristol.

In 1975 the Dublin Airport Authority ('Aer Rianta'), the then state airports authority, undertook a passenger terminal study aimed at improving the terminal facilities, resulting in the provision, over the next two years, of new departure and arrival halls, a new check-in area, office complex, information desk, duty office and executive lounge. The new extensions and facilities were opened in 1978.

The 1980s began with an extension of the main apron. New services to London Gatwick began, while Aer Lingus' commuter division started a new domestic service to Dublin Airport. In 1985 following significant growth, Aer Rianta carried out a survey of the terminal facilities with a view to carrying out a major expansion and development programme. On 8 June 1987, Ryanair commenced services at Cork Airport. The following year, Phase I of the Terminal Expansion and Development Plan was completed. The following year the main runway extension of 1,000 feet was opened.

The 1990s began with the completion of Phase II of the terminal expansion in 1991 and Phase III being completed in 1992 with the plan being brought to completion in 1994.

A Great Southern Hotel was opened on the airport grounds during 2001 and plans were drawn up for the construction of a new terminal building and ancillary capital investment works at an estimated cost of €140 million. Also towards the end of 2001, new Irish regional airline Aer Arann opened its second base at Cork opening new routes to/from the airport.

Along with the construction of the terminal, roads were upgraded from single to dual carriageway and re-aligned, and a new short term multi-storey car park was constructed. Airbridges were included in the original terminal design, however only one airbridge was built because airline representatives from the low-cost carriers who use Cork Airport made it clear that they did not want airbridges, would not use them and would not pay for them. In the circumstances, the Dublin Airport Authority removed the airbridges from the terminal design during construction of the new facility. The new terminal was completed with four fixed links to the main building, and was designed to accommodate additional airbridges in future or if needed.

In 2005, Ryanair opened its 15th European base and second Irish base at Cork. The following year, the new terminal opened on 15 August 2006: the first built in Ireland in the 21st century.

The Irish Aviation Authority completed a new control tower a thousand yards from the old terminal to the west of the main runway. 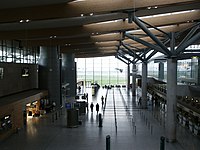 The airport at night

The main terminal at Cork Airport contains several shopping and eating facilities both before and after the security screening area, a bureau de change kiosk and cash machine and a business lounge operated by Swissport. There are eight departure gates in the airport, two of which have an airbridge. Wi-Fi is available throughout the terminal.[2]

There are two hotels located adjacent to the passenger terminal, the Cork International Hotel which is located in the business park, and the Cork Airport Hotel (previously branded Park Inn by Radisson) which is located opposite the terminal on airport grounds.

Cork Airport has a number of services supporting general aviation flying, and also serves business jets. Both fixed wing and rotary wing flight training providers operate at the airport, with flying schools located to the south of the terminal building, on the east side of the main runway.