Dodd is a small fell in Cumberland, in the Lake District, two and a half miles north-west of Keswick. It forms part of the Skiddaw range in the northern part of Lakeland. The slopes are heavily wooded. 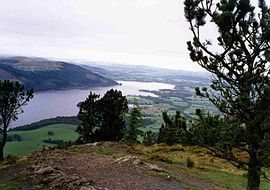 The northern end of Bassenthwaite Lake from Dodd

Dodd is on Forestry Commission land known as Dodd Wood. For many years it was extensively planted with conifers right up to the summit which obstructed the view. However, the Commission started a programme of tree clearance from the top of the fell in 2001 and the summit of the fell is now clear; it is hoped that it will revert to heather moorland in years to come. Alfred Wainwright voiced strong opposition to the afforestation of Dodd in his Pictorial Guides to the Lakeland Fells in 1962; it took 40 years for his wishes to come true.

In common with much of the Northern Fells the Kirk Stile Formation of the Skiddaw Group predominates. This is composed of laminated mudstone and siltstone with greywacke sandstone and is of Ordovician age. There are minor intrusions of lamprophyre.[1]

In recent years Dodd and Dodd Wood have become a magnet for visitors as the area around the southern end of Bassenthwaite Lake is home to the only pair of nesting ospreys in northern England. An open-air viewing platform was opened on the slopes of Dodd in June 2001 which gives a clear view of the nest from a safe distance. Dodd Wood is one of the diminishing strongholds of the red squirrel in Great Britain and the Forestry Commission, along with the Department for Environment, Food and Rural Affairs, have begun a campaign of protection from the grey squirrel.

Dodd is generally climbed from the car park at the Old Sawmill tea room (grid reference: NY235281) on the A591 road, opposite the Mirehouse; there is a waymarked route right up to the summit of the fell. It is possible to continue the walk from Dodd to take in the adjoining fell of Carl Side and then continue to the summit of Skiddaw, one of the few 3,000-foot mountains in Lakeland.

The top of the fell is marked by a stone memorial pillar. The view from the top is excellent for a fell of modest height, encompassing the entirety of Bassenthwaite Lake and Derwent Water as well as the high mountains of Scafell Pike, Great Gable and Bowfell 15 miles away to the south; the hills of Galloway are also visible to the north-west.

In the 1860s, Dodd was home to a hermit called George Smith, who became known as the Skiddaw Hermit. He lived on a ledge on the fell in a wigwam type tent made from a framework of branches and built against a low stone wall. He stayed there in all weathers because he liked the outdoor life. He earned money by painting portraits and doing character assessment at local fairs. A short book was written about him in 1996 called the "Skiddaw Hermit" by Mary E. Burkett.