Didmarton is a village in Gloucestershire, about six miles south-west of Tetbury. The parish is close to the border of Wiltshire to the south.

Immediately to the north is a smaller village, Oldbury-on-the-Hill, where the original parish church stands: Oldbury was once the dominant settlement.

St Laurence's church at Didmarton (Church of England) is an early English building with a later open bell tower, unusual in England.[1] Archaeological work at Didmarton church has suggested an origin in the 12th century.[2] The church's dedication is to St Laurence of Canterbury, whose feast day is on 3 February.[3]

The village's Congregational church is a square stone building with arched sash windows.

Another Anglican church at the western end of the village, once dedicated to St Michael and All Angels, has been converted to a private house, but its churchyard is still consecrated ground.[4] 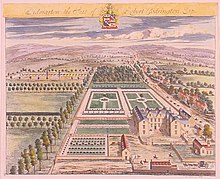 Didmarton, the Seat of Robert Codrington, Esq. from Britannia Illustrata, 1709

A military survey of Didmarton in 1522 shows that it was then a very small village, overshadowed by the neighbouring Oldbury-on-the-Hill.[3]

In the 16th century, the manor of Didmarton was owned by the Seacole family. In 1571, Simon Codrington married Agnes, daughter and co-heiress of Richard Seacole, and the estate thus passed to their son Robert Codrington. It was sold to Charles Somerset, 4th Duke of Beaufort, in about 1750, but has had a succession of other owners since then.

According to The National Gazetteer of Great Britain and Ireland (1868):[7]

The village's present-day pub, the King's Arms, was first mentioned in 1772. The former George Inn dated from at least 1791, and the former Compasses Inn (or Three Compasses) from 1798.[3]

Parish registers from 1674 to 1991 are held at the Gloucestershire Record Office.[8]

The surnames recorded in the parish graveyard, and in that of the Didmarton Congregational church, include: Baker, Bickerton, Borham, Cox, Gould, Hatherell, Inane, Lucas, Pritchard, Short, Rice, Robbins, Till, and Tuck.[4]