Darnick is a village in Roxburghshire, immediately to the west of Melrose, and in an almost unbroken townscape stretching outwards along the south side of the River Tweed here from Melrose towards Galashiels.

The village's name was first recorded in 1124, and its name has changed from Dernewic, Dernwick and Darnwick to the present Darnick. Darnick Tower was built around 1425, and another tower house, Fisher's Tower, is still recognisable by its remains; however there is no trace of the third tower.

Skirmish Hill by Darnick is the site of a battle which took place on 18 June 1526 between the Scotts of Buccleuch and the Kerrs of Ferniehirst, trying to intercept King James V who was then under the guardianship of Archibald Douglas, 6th Earl of Angus.

John Smith of Darnick created the Wallace Statue at Bemersyde House. His family were builders and masons during the first half of the 19th century, and they have to their credit an extension to Abbotsford, Dryburgh Abbey House, Eckford Church, Gattonside House, Hawick North Bridge, the bridge over the Hermitage Water, Melrose Parish Church, and Yetholm Parish Church. 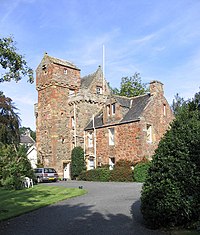