Dalderby is a tiny village in Lindsey, the northern part of Lincolnshire, found beside the Horncastle Canal (which has swallowed the River Bain in this stretch, about three miles south of Horncastle, on the A153 road by Roughton.

The village once had a parish church of its own, St Martin's. It was demolished in 1742, possibly because of a decline in village population.[1]

Teapot Hall was an early 19th-century one-roomed cottage with a thatched roof. However it was long regarded as a mediæval building, of considerable historical importance as a survival of an early timber-framed house. In 1945 it was burnt down accidentally during VJ Day celebrations, and nothing remains today. It was at this point that its true date was discovered.[2][3]

Manor Farmhouse is a Grade II listed building that dates from the 17th century. It has a thatched roof. Dado panelling inside the building reputedly was taken from the demolished St. Martin's Church.[4] 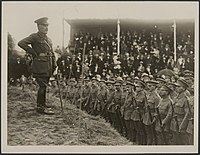 Supposedly the village sent the largest proportion of its men to fight in the Great World War of any village in the country, though this is disputed by Knowlton in Kent. A "War Cross", or temporary stand-in for a permanent war memorial, was unveiled there by General Sir William Robertson, chief of the Imperial General Staff from 1916-18.