From Wikishire
Jump to: navigation, search
For the village in Carmarthenshire, see Cwmamman.

Cwmaman is a former coal-mining village near Aberdare, Glamorgan. The name Cwmaman is from the Welsh language for "Aman Valley", with the River Aman flowing through the village. It lies in the valley of several mountains. Within the village, there are two children's playgrounds and playing fields, with an outdoor pool open during the summer. At the top end of the village, there are several reservoirs, accessible via several footpaths along the river.

Cwmaman was a well-known coal-mining village which, at one time boasted several collieries. Until the 19th Century, Cwmaman was virtually uninhabited, with around 40 farm workers living in and around the community by 1841. By the end of the 1840s, the first coal pits were sunk and Cwmaman began to transform into a thriving industrial settlement, in the later years of the 19th century Cwmaman housed the workers of five surrounding coal mines - the Fforchaman, Fforchneol, Bedwlwyn, Cwmneol, and the Cwmaman. Cwmaman Colliery was also known as Shepherd’s Pit, in honour of its founder Thomas Shepherd, a name it shares with the village’s first public house, the Shepherd’s Arms, which was opened in 1850.

There is an array of parallel roads in the east part of the village. Burns Street and Spencer Street, along with the other streets collectively known as Poets' Corner, are amongst the steepest in the United Kingdom. 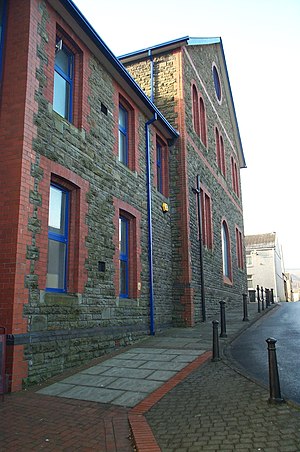 The band Stereophonics comes from Cwmaman. On 14 December 2007, in association with Jo Whiley and her BBC Radio 1 Live Lounge Tour, the Stereophonics returned to Cwmaman to play an exclusive acoustic gig in the Cwmaman Working Men's Club, the venue where the band first performed.

The village is home to the war poet Alun Lewis, and a plaque in what is now Llanwonno Road marks the house where he once lived. Born in 1915 in the village’s Llanwonno Road, Lewis was strongly influenced by his formative years in the depression-era valley. He was also influenced by local issues of his community in the then-called Aberdare Leader and this is proved in his great poem The Mountain over Aberdare, which touches on the desperate poverty that beset the Cynon Valley and the country in this period. However, it was for his war poems, published in two volumes (Raiders Dawn and Ha! Ha! Among the Trumpets) that Alun Lewis’s reputation would be made. His name lives on, both as a significant poet and within the village itself, not only in a plaque commemorating the house of his birth, but also in the name of the village’s Cwrt Alun Lewis flats.

Cwmaman Public Hall & Institute is a community-owned enterprise: it consists of a concert room, theatre / cinema and fitness suite

St Joseph's Church was renovated in 2007. This work included the installation of solar panels on one side of its roof with the aim to sell back energy to the National Grid.

The Cwmaman Music Festival is held at the last weekend of September every year. It started in 2008 and has attracted artists such as Alabama 3, Mike Peters, Killing for Company and many unsigned artists of all genres.

Although difficult to appreciate today, religion played a central role in the life of the village until the second half off the twentieth century. Seion remained an active place of worship until its closure for financial reasons in 2013. The congregation still meets at the former Moriah Aman Congregational Chapel, now an evangelical church. The third Welsh-language chapel in the village was Soar, a Calvinistic Methodist church which closed in the late 1980s. It has now been demolished.

Regeneration and the community

The Cwmaman Communities First Partnership was established in October 2001 aiming to bring individuals, voluntary groups and public and private sector organisations in the community together to help create a better future for the area.[1]

Many innovative environmental projects have taken place including the hosting of an environmental festival centred on St Joseph's Church, holding a sculpture exhibition, the development of a community woodland walk, and establishing a Cwmaman Sculpture Trail.