Chew Stoke is a small village, of some 990 souls, in the Chew Valley, in Somerset, about eight miles south of Bristol, at the northern edge of the Mendip Hills. The village is within the Bristol/Bath Green belt. The parish of Chew Stoke includes the hamlet of Breach Hill, which is approximately two miles southwest of Chew Stoke itself.

Chew Stoke has a long history, as shown by the number and range of its heritage-listed buildings. The village is at the northern end of Chew Valley Lake, which was created in the 1950s, close to a dam, pumping station, sailing club, and fishing lodge. A tributary of the River Chew, which rises in Strode, runs through the village.

The village is served by one shop, two public houses, a primary school and a bowling club. The village has some areas of light industry but is largely agricultural; many residents commute to nearby cities for employment.

The area of Chew Stoke is surrounded by arable land and dairy farms on the floor of the Chew Valley.

The village runs along the Strode Brook, a tributary of the River Chew, on the northwest side of the Chew Valley Lake. While much of the area has been cleared for farming, trees line the tributary and many of the roads.

The village is built along the main thoroughfare, Bristol Road, which runs northeast to southwest. An older centre is located along Pilgrims Way, which loops onto Bristol Road and features an old stone packhorse bridge—now pedestrianised—and a 1950s 'Irish bridge', used as a ford in winter.[1] Houses line both of these roads, with residential cul-de-sacs and lanes extending from them. 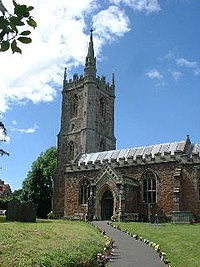 St Andrews Church stands on the outskirts of Chew Stoke. It was built in the 15th century and underwent extensive renovation in 1862. Today it is Grade II* listed.[2][3]

The inside of the church is decorated with 156 angels in wood and stone,[1] and the church includes a tower with an unusual spirelet on the staircase turret. In the tower hang bells cast by the local family of bellcasters, the Bilbie family.[3]

The reconstructed Moreton Cross in the churchyard was moved there when Chew Valley Lake flooded,[4] and the base of the cross shaft, about 80 feet southwest of the tower, is thought to date from the 14th century and is itself Grade II* listed.[5] The churchyard gate, at the southeast entrance, bears a lamp provided by public subscription to commemorate Queen Victoria's Jubilee of 1897 and is Grade II listed.[6]

The Rectory, at the end of Church Lane, opposite the church hall, is believed to have been built in 1529 by Sir John Barry, rector 1524–46. It has since undergone substantial renovations, including the addition of a clock tower (since removed) for the Rev. W P Wait and further alterations c.1876 for Rev. J. Ellershaw. The building has an ornate south front with carvings of shields bearing the coat of arms of the St Loe family, once the local squires, alone or impaled with arms of Fitzpane, Ancell, de la Rivere, and Malet. It is Grade II* listed.[7]

The Old Rectory, south front with carvings of shields

The remains of a Romano-Celtic double-octagonal temple have been found on Pagans Hill near Chew Stoke, possibly dedicated to the Roman god Mercury. It consisted of an inner wall, which formed the sanctuary, surrounded by an outer wall forming an ambulatory, or covered walkway 56 feet 6 inches across. It was first built in the late 3rd century but was twice rebuilt, finally collapsing in the 5th century.[8] The positioning of the temple on what is now known as Pagans Hill may seem apt, but there is no evidence for any link between the existence of the temple and the naming of the road.[9]

In the Domesday Book of 1086, Chew Stoke is listed as Chiwestoche. It was recorded as belonging to Gilbert Fitz-Turold. He though conspired with the Duke of Normandy against King William Rufus and consequently all his lands were seized. The next recorded owner was Lord Beauchamp of Hache.

Farming in the Middle Ages was much as today, both arable and dairy, and there were orchards too. Evidence exists of lime kilns, used in the production of mortar for the construction of local churches.[4]

In the 20th century, Chew Stoke expanded slightly with the influx of residents from the Chew Valley Lake area. These new residents were moved to Chew Stoke when the lake was created in the 1950s.[4] In Second World War, 42 children and three teachers, who had been evacuated from Avenmore school in London, were accommodated in the village.[1]

On 10 July 1968, widespread flooding resulted from torrential rainfall; 7 inches fell in 18 hours, double the area's average rainfall for the whole of July.[10] The damage in Chew Stoke was not as severe as in some of the surrounding villages, such as Pensford; however, fears that the Chew Valley Lake dam would be breached caused considerable anxiety.[10][11]

On 4 February 2001, Princess Anne]] opened the Rural Housing Trust development at Salway Close. Each year, over a weekend in September (usually the first), a "Harvest Home" is held with horse and pet shows, bands, a funfair, and other entertainments. The Harvest Home was cancelled in 1997 as a mark of respect following the death of Princess Diana]] in the previous week.

During November 2012, floodwaters returned, as in much of Britain. On 22 November a man died after his car was washed down a flooded brook in Chew Stoke and trapped against a small bridge.[12][13]