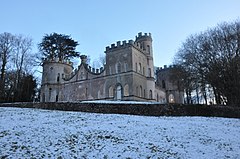 Clytha Castle is a folly near Clytha between Llanarth and Raglan in Monmouthshire. One of the two "outstanding examples of late eighteenth century fanciful Gothic in the county",[1]"this stupendous folly enjoys magnificent views to the mountains of the north-west, Skirrid and Sugar Loaf."[2] The castle is a Grade I listed building as of 1 September 1956.[3]

Clytha Castle folly is set close to the A40 Abergavenny to Raglan road, originally within the parkland that formed part of the estate of nearby Clytha Park, some four miles west of Raglan at the Betws Newydd turnoff. There is a car park nearby and the Usk Valley Walk passes close by.

Clytha Castle is a crenellated stone folly with gothic windows set on a rounded hill, amid chestnut groves, overlooking Clytha Park and the River Usk. It was built in 1790 by William Jones of Clytha Park in memory of his wife who had recently died. William Jones engaged John Davenport as the architect to realise his ardent wish for a folly built "for the purpose of relieving a mind sincerely afflicted by the loss of a most excellent wife". A tablet set into the walls of the folly records this dedication. A, perhaps more cynical, contemporary observer noted that Jones's wife was "the female heir of the House of Tredegar, who bestowed on the proprietor a splendid fortune."[4]

William Jones in his bereavement wanted a beautiful monument, a sanctuary and a retreat. Built of rendered rubble stone with Bath stone dressing it is one of the finest 18th century Welsh follies. The plan is "L" shaped, with a square, two-storyed central block, with screen walls and drum towers to either side.[5] It is exquisitely proportioned with picturesque asymmetry and located in a landscape that balances the building and complements it. "Everything is big and simple, to (be) read from a distance."[6] The round tower is roofless and was designed as a shell in order to add symmetry to the facade.[7]

Clytha Castle is in the care of the Landmark Trust who for the last 20 years or so have maintained the building and enabled many visitors to the area to fully appreciate it through letting it as holiday accommodation.

The accommodation consists of a substantial sitting room in the central tower, a dining room and kitchen, and a ground floor double bedroom. A spiral stone staircase leads to an upper floor with a main double bedroom in the central tower, and a smaller twin room and bathroom over a landing. One of the circular towers is now open to the sky, and is used only for storage.

Nearby is Neoclassical Clytha Park, hidden from the old A40 road, but its gothic gates, designed by John Nash are visible right on the road at the long drive [1] and [2].

Raglan Castle is easily seen from the A40 dual carriageway at Raglan.