Chipping is a village in Lancashire, very close to the boundary of the West Riding of Yorkshire, and within the edge of the Forest of Bowland Area of Outstanding Natural Beauty. At the 2001 census, the parish had a population of 1,046.

The village has won a number of best kept village competitions over the years. The village also won the village section of the Royal Horticultural Society Britain in Bloom competition in 2009 picking up RHS Tourism and Gold achievement awards in the process.

Chipping is named in the Domesday Book as Chippenden; the name is derived from the Old English word meaning 'market'.

Just to the north of the village the Forest of Bowland access areas of Clougha, Fair Snape, Wolf Fell and Saddle Fell have been opened up to the public by access agreements negotiated between the council and the owners. This has opened over 3,260 acres of open country to walkers. 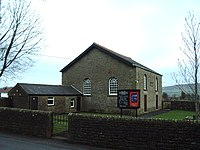 St Bartholomew's is an active church (in the deanery of Whalley within the Diocese of Blackburn. Its benefice is united with that of St Michael, Whitewell.

The church is a Grade II* listed building.[1]

In the 1820s George Weld, who was squire of Leagram, donated land in the village for the construction of a Roman Catholic church, a school, a priest’s house and a cemetery. St Mary’s was built at a cost of £1,130.

The organ was reputedly bought from Stonyhurst College in 1872 and it has been dated by experts to be of the early 18th century.

The chapel now known as the Congregational Church was built in 1838 for use as an independent non-conformist place of worship.

The village is known to be at least 1,000 years old and is mentioned in the Domesday Book. It lies on the south-western edge of the ancient Forest of Bowland abutting the civil parish of Bowland-with-Leagram. Leagram Park, the site of one of the mediæval deer parks of the Forest, is a short drive from the village. Nevertheless, the Forest itself is a Yorkshire forest, and so Chipping, across the border, was not a part of it and its manor did not fall within the powerful Lordship of Bowland.[2]

Chipping throve during the Industrial Revolution when there were seven mills located along Chipping Brook. The last survivor was Kirk Mill, the chair making factory of HJ Berry, but in 2010 the company went into administration, the factory closed,[3] and on 7 March 2011 the works were bought by 53N Bowland Ltd.[4] 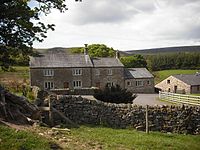 Chipping Craft Centre holds the honour of being the property which has been used as a shop for the longest continuous time in the UK.[5] It has previously been used as an undertakers, butchers and most recently as a Post Office amongst other trades. However now it is a newsagents, tea shop and craft centre and only operates as a Post Office two days a week. The first shop was opened at this location in 1668 by a local wool merchant.[6]

Woolfen Hall, at the foot of nearby Parlick, is a Grade II listed building, possibly 16th-century but altered in 1867-8.[7]

Chipping has its own local historical society.

Chipping Agricultural Show is a local country show that was first held in 1920. The show celebrates all aspects of farming and rural life with classes for sheep, cattle, light horses, ponies and shire horses plus poultry, pigeon and egg sections. There are also competitions for cheeses, handicrafts, cakes and preserves, a large horticultural section plus children's, dog and baby sections.

Originally held in 1998 and intended as a one-off fund raising event for a new Village Hall, Chipping Steam Fair has now become a firm fixture in the village calendar. The fair now regularly attracts around 20,000 visitors and upward of 500 exhibitors over the Spring Bank Holiday weekend each May.

Near to the village is a small grass airstrip that is used by winch-launched gliders.