Chew Magna is a village in the Chew Valley in Somerset. It is in the north of the county close to the northern edge of the Mendip Hills. The village was designated a conservation area in 1978. It has many listed buildings reflecting the history of the village.

The River Chew flows through the village. To the south of the village is Chew Valley Lake, a manmade reservoir dug to supply water to Bristol which is now also a nature reserve.

Chew Magna has long been the largest village in the district, and can trace its importance back to Anglo-Saxon times. It was a thriving woollen centre in the Middle Ages - in 1086 it was recoded as having 108 households and rendering £46 a year, most of its land being cultivated and having five mills, 29 cattle, 36 pigs, 448 sheep and 46 goats.[1]

The manor of Chew was held by the Bishops of Bath and Wells from 1062 to 1548, and therefore was called Chew Episcopi or Bishop's Chew. The bishops built a palace near the church of St Andrews, which was visited by Henry III in 1250.[2] Chew Court is a surviving part of the palace and has its adjacent well head also listed for its long heritage.[3]

In the eastern corner of the south aisle of the church is a monument of the Baber family, who formerly had large possessions in the parish.[4] Inserted in a window of the aisle, is a wooden effigy, supposed to be of Sir John de Hautville, a Knight of Henry III's, who owned the northeastern estate named Norton Hautville, now Norton Hawkfield: in the same directional corner of the church are monuments to the Strach(e)y family who lived at Sutton Court.[5]

After the Dissolution of the Monasteries

Since about 1600, the name of the village changed from Chew Episcopi to Chew Magna, 'Great Chew', as this has been the most important of the several villages along the banks of the River Chew.

Around 1700 the Lord of the Manor was Sir William Jones, the Attorney General of England[6] and in the 1820s it was the seat of Lord Lyttelton.[7]

Until about 1880 the village had toll roads and a toll house to collect the fees.[8]

By 1848 the population was partly employed in coal mines in Bishop Sutton, and in the manufacture of stockings and of edge tools to a limited extent; formerly there was a considerable factory for cloth.[5]

During the late 19th and 20th centuries the importance of the wool trade in the village declined and it became largely a commuter village for the cities of Bristol and Bath, although it has continued to be the commercial centre of the valley.

During German bombing raids targeted on Bristol, many bombs fell in the parish: Ruen House on the road to Chew Hill was bombed. The nearly flat area just east of the Y-junction on Chew Hill was initially chosen as a Starfish site area to be lit by fires to simulate Bristol in flames.[9] Later, about half way between North Chew Farm and Manor Farm, North Wick was an area secured by Royal Air Force personnel, lit by fires, and with "automatic" guns to simulate anti-aircraft guns.[10][11] There was also a genuine heavy anti aircraft battery at Chewhill farm.[12] The area was guarded by pill boxes of which one remains on the west side of Blacklands (ST579640).

The construction of Chew Valley Lake in the 1950s brought opportunities for leisure and tourism.

The tower is about one hundred feet tall and was probably built about 1440.[13] There has been a clock on the tower since the early 1700s.

Inside the church has a Norman font and a rood screen that is the full width of the church. There are several memorials to the Stracheys of Sutton Court together with a wooden effigy of a Knight cross-legged and leaning on one elbow, in 15th century armour, thought to be of Sir John de Hauteville or a descendant, and possibly transferred from a church at Norton Hautville before it was demolished.[14]

The churchyard contains several monuments which are Grade II listed buildings in their own right. 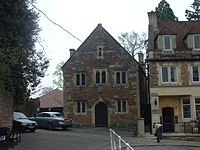 Next to the church is the Church House, which is also known as the Old School Room. The upstairs room was the local school from the mid or early 15th century, with the village poorhouse below. This has been a venue for social activity in the village and in 1971 underwent major renovation. It is a Grade II* listed building.[15]

Also close to the church is Chew Court, which was originally a bishop's palace. It was largely rebuilt in 1656, from which a little survives as the Chew Court of today including an Elizabethan doorway with Doric pilasters.[13] The room over the gatehouse is said to have been used as a court-room, with the turrets used for holding prisoners. Chew Court is a Grade II* listed building.[16]

The Manor House has Tudor origins, including a fireplace dated 1656, with a Gothic exterior from 1874, largely redesigned by John Norton. Amongst the brought-in pieces in the house are two South German reliefs, "The Martyrdoms of St Catherine and St Sebastian", from an altar of the early 16th century. There are also a series of panels in the Floris style, probably Flemish and with a repeating date 1562.[13] From 1680 to 1844 the Manor House was the home of prominent Quaker families including the Vickris, the Summers and the Harfords. William Penn preached here in 1687. The house has almost five acres of gardens laid out in the 19th century. The house is a Grade II* listed building and now forms part of the local convent school.[17]

Two of the stables attached to the Manor House are Grade II listed also.

On Battle Lane is the 18th century Rookstone House, which was formerly the end house in a row of seven,[18] and The Rookery[19] and its lodge,[20] which were built in the early 19th century.

Harford Square is dominated by the construction, in 1817, of Harford House[21] and its accompanying stable block.[22]

Just south of the village is the mediæval Tun Bridge with three pointed arches including double arch rings, spanning 60 feet over the river, approached along one of the high pavements that are a feature of the village centre. It has three pointed arches, two of which have double arch rings built in two orders. At its widest point it is 17 feet wide and 16 feet in the centre. The two main arches are separated by a sharp cutwater 3 feet 6 inches and tapering to 8 inches above which a 4-inch string course runs throughout the length of bridge. The bridge is thought to date from the late 15th century and is a Grade II listed building[23] and a Scheduled Ancient Monument. The raised pavement and steps are themselves also listed Grade II.[24]

Surrounding the village are several historic farmhouses including Dumper's Farmhouse, which dates from the 15th century,[25] and Knole Hill Farmhouse, dated 1763.[26]

Clubs and societies in the village include: