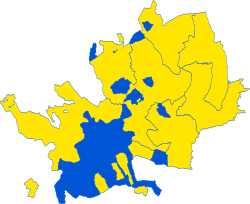 The Cashio Hundred highlighted in Hertfordshire

The Cashio Hundred, formerly the Liberty of St Albans, is a hundred of Hertfordshire. It is the most populous of the hundreds, with a population of 430,640 in 2011.

The origins of the liberty are unclear, but the abbots of St Albans claimed that the privileges had first been granted by King Offa of Mercia, who founded the abbey in 793.[1] Exactly what powers the liberty possessed previous to the twelfth century are not known. Edward I gave the abbot of St Albans palatine powers equal to those enjoyed by the bishops of Durham and Ely.

At the time of the Domesday Book the liberty was known as Albanestou. The boundaries of the area expanded over time, including at times parts of Buckinghamshire. It became known by the alternative titles of St Albans Hundred, and eventually as the Hundred of Cashio.

With the dissolution of the abbey the Borough of St Albans was granted a charter of incorporation as a free borough, having previously been under the control of the abbot. The liberty was henceforth placed under the corporation of the borough. Palatine status was discontinued, although the borough and liberty retained its own quarter sessions. The administration was headed by a high steward chosen by the corporation.

The liberty was extinguished and its authority assumed by the justices of Hertfordshire in 1874 by Act of Parliament, the Liberty of St Albans Act (37 & 38 Vict. c.45).