Burry Port is a small town five miles outside the larger centre of Llanelli in Carmarthenshire, on the Loughor estuary. The town's population was 4,209 at the 2001 census.

The town has a harbour and is where Amelia Earhart landed as the first woman to fly across the Atlantic Ocean. The Pembrey Burrows sand dune and wetland system has a country park and the Cefn Sidan sands, lie nearby. The town also has a proud musical heritage and Burry Port Opera, Male Choir and Burry Port Town Band are at home here. 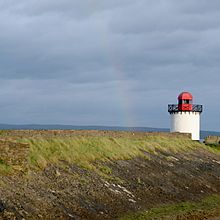 Burry Port lies south east of the Gwendraeth valley which runs north easterly from Kidwelly for about twelve miles. The land around the valley itself contains large amounts of coal as well as limestone. The Gwendraeth Fawr flows the length of the valley and joins the sea south of Kidwelly flowing into the estuary of the Loughor river (known locally as the "Burry"). West of the town's shoreline is Pembrey Burrows, a large area of burrow and marshland which historically occupied many square miles of land, much of which has later been reclaimed. To the north of the town is the hill Mynydd Pembrey, or Pembrey Mountain.

People made a living in Burry Port from farming and fishing before the industrial revolution brought the railways and collieries to the area, As Pembrey Burrows was a hazard to shipping, local people would also salvage what they could from boats wrecked in storms while navigating the Bristol Channel.

Pembrey sands have proved the final resting place of many ships, some by mishap, others it is said lured to their doom deliberately to provide plunder for the wreckers known as "Gwyr-y-Bwelli Bach" or "The Men of Little Hatchets". They were named after the locally made tool, a hatchet incorporating a claw for ripping open cargo and equally useful for dispatching unwanted witnesses to the wreckers' activities .

Records indicate that coal mining was established in the valley as early as 1540 although there was little effective transport. The Gwendraeth Fawr at the time was navigable but treacherous.

Growing interest in coal, limestone and iron ore drove the growth of the coal trade. Thomas Kymer, owner of many mining and other operations in the area established several loading places and primitive trackways to load barges on the Gwendraeth Fawr. Cargo was carried down the Gwendraeth river and then up the Towy to Carmarthen. In 1768 Kymer opened a canal and quay, part of which is today restored and preserved. The canal cut through the marshes allowing boats to travel upstream far enough to reach solid ground where quays could be built. This allowed barges to operate at all times and without having to wait for tides to get inland. A canal alone was not sufficient to solve the transport problems and wagonways were built to carry traffic from the mines to the canal itself. Several of these wagonways became plateways and then railways as technology improved.

A second canal was cut by the Earl of Ashburnham in 1798 to serve his mines nearby and this also was fed by wagonways. The canals continued to expand and wharves and dock facilities were built. More mines continued to open further up the valley sending their coal down through the canals to the sea. The trade in coal was hindered heavily however as the shifting sands made the river treacherous and the safe paths changed year by year. 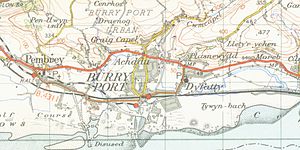 In 1832 a harbour was built at Burry Port, a few years after the nearby harbour at Pembrey opened. Fed by a series of chaotic canals and wagonways it finally offered a way to ship Gwendraeth coal out by sea. No village or town of Burry Port yet existed. By 1840 the canals feeding Burry Port and their tramways fed coal from the entire Gwendraeth valley down to the sea. Early records of Burry Port as a town appear around 1850, springing up around the new docks adjacent to Pembrey. The importance of the newly emerging town was plain when the railways reached Burry Port, and the station serving both Pembrey and the new town of Burry Port was built a few hundred yards down from Pembrey at Burry Port

With the closure of all the mines at Cwm Mawr the railways up the valley were lifted. The harbour is now a marina for small leisure craft. Pembrey and Burry Port railway station still exists and is served by regular services east via Swansea and Cardiff to London and west into Pembrokeshire.

Burry Port lies on the Millennium Coastal Path from Bynea near Llanelli to Pembrey Burrows.

The town has a lifeboat station in Burry Port Harbour. 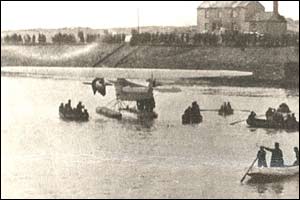 On 17 June 1928 Amelia Earhart flew from Newfoundland with co-pilots Wilmer "Bill" Stultz and Louis "Slim" Gordon in a Fokker F7 and on 18 June landed safely in Burry Port, becoming the first woman to fly across the Atlantic.

An Amelia Earhart festival was held in June 2003 to celebrate the 75th anniversary of the landing, and the event is commemorated by engraved flagstones and a plaque in the harbour.[1] 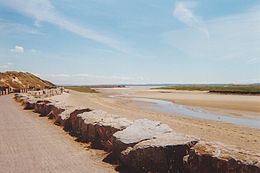 Burry Port is connected to Llanelli and Carmarthen by the A484 road.

Burry Port is connected to the The Millennium Coastal Park which includes a 14-mile pedestrian walkway and cycleway along the south coast of Carmarthenshire, providing a link between Bynea, Llanelli and Pembrey Country Park. The Millennium Coastal Path cycleway forms a section of both the Celtic Trail cycle route (part of NCR 47) and the National Cycle Network NCR 4.

Pembrey Airport is only a few miles east of Burry Port, and is connected to the town by road links. The nearest airport with domestic and international scheduled flights is Cardiff International Airport.