Herne Hill is a town of Surrey, long swallowed within the metropolitan conurbation. There is a road of the same name which continues the A215 north of Norwood Road and was called Herne Hill Road.

The name Herne Hill initially appeared in 1798, when the area was farms and woodland. It has been suggested that it derives from previously being called Heron's Hill, as the River Effra attracted a large number of herons, but other explanations have also been suggested. 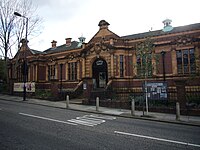 Herne Hill is situated between the more well-known areas of Brixton, Dulwich and Camberwell. It is a community of just under 12,000 people, with a range of independent shops, art galleries, bars and restaurants. Famous Herne Hill residents from history include John Ruskin and the Lupino family, and actor Roddy McDowall was born there.

In Herne Hill is Brockwell Park. Near a hilltop in Brockwell Park stands Brockwell Hall, which was built in 1831. The land surrounding it was opened to the public in 1891 after it was purchased by London County Council. Brockwell Park hosts the unlikely-sounding annual Lambeth Country Show. The park also houses Brockwell Lido, an open-air swimming pool built in 1937.

Situated in a park off Burbage Road, the Herne Hill Velodrome was built in 1891, is the only remaining cycle racing track in London, and hosted the track cycling events in the 1948 Olympic Games. Unlike most modern, steeply-banked velodromes, it is a shallow concrete bowl. It also has a football pitch, and was home of Crystal Palace FC from 1915 until 1918. The 'Save the Herne Hill Velodrome' campaign is currently seeking to find a way to secure the future of the site and make it a viable long-term facility for all, including local residents and schools. The London Olympic Committee did not see fit to scrape the track down to serve in the London Olympics of 2012.

The Grade II listed Half Moon Pub on Half Moon Lane has hosted a boxing gym for over 50 years, currently run by former British and European light welterweight champion Clinton McKenzie.[1] It is on the route of the River Effra.

St Paul's church on Herne Hill was originally built by G Alexander in 1843-4, at a cost of £4958,[2] but dramatically rebuilt after a destructive fire by the gothic architect G E Street in 1858, and is now listed Grade II*.

The lake in Sunray Gardens at the junction of Elmwood Road and Red Post Hill, was originally the fish pond in Casino house dating from 1796 to 1797 (now demolished), of which the adjoining Casino Estate still bears the name. Sunray Gardens is a Grade II Listed landscape.

The Carnegie Public Library on the road now named Herne Hill Road opened in 1906 after Andrew Carnegie granted funds to a Lambeth Librarian for building a library within the Herne Hill area. It is also a listed Grade II building.[3]

A Blue Plaque at 51 Herne Hill (by the junction with Danecroft Road) marks the former home of author Sax Rohmer (alias Arthur Henry Ward), most famous as author of the series of novels featuring the master criminal Dr Fu Manchu. 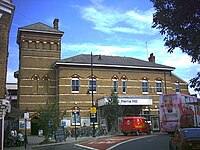