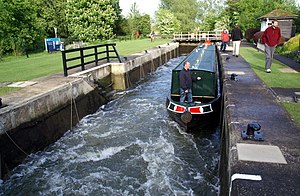 Buscot Lock is a lock on the River Thames in Oxfordshire, near the village of Buscot, Berkshire.

The lock was built of stone by the Thames Navigation Commission in 1790 and is the smallest on the River Thames. Like most of the Upper Thames Locks, it still has its heavy wooden beams which the lock keeper uses to open and close the gates.

Before the construction of the lock, a flash lock was in place at Buscot weir to "help" navigation. When the lock was built the weir was owned by E Loveden of Buscot Park, who was a very strong champion of Thames navigation. The pound lock was built by J. Nock who also built St John's Lock at the same time after the opening of the Thames and Severn Canal.[1] At first it was often alluded to as the "New Lock". The lock keeper's cottage was built in 1791 and features a fish house. The old weir was renewed by Lord Faringdon of Buscot Park in 1909, and was replaced by the new cut and weir in 1979.

The river winds and doubles back on itself sharply on the short stretch upstream. Buscot Park is above the lock. Robert Tertius Campbell who bought it in 1859 built a factory to distill alcohol from sugar beet. He supplied water to his estate from the river via a set of water wheels, but closed the undertaking in 1879. The property is now owned by the National Trust. Upstream, Bloomers Hole Footbridge crosses the river, then the River Cole enters from the southern bank, the River Leach enters from the northern bank, and finally St John's Bridge marks the beginning of St John's Lock.

The Thames Path follows the northern bank from Buscot Lock to Bloomers Hole Footbridge, where it crosses the river.