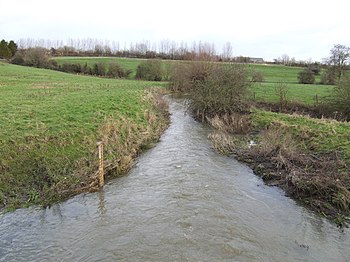 The Cole marking the Berkshire-Wiltshire border

The River Cole is a tributary of the River Thames which flows through Wiltshire and Berkshire, where it forms part of the border between the two counties.

The river rises near Swindon at the springs which fed the old Wilts and Berks Canal at Marshgate. The precise location is unknown as much of the upper course has been culverted and built over. The first signs of its existence can be seen just above the Greenbridge retail park where it flows easterly through it. From there it is culverted, across to Oxford Road where it turns south for about three quarters of a mile. At the Piccadilly roundabout it turns abruptly east and skirts the Coleview Estate. It flows east past Covingham and under Merlin Way through the flood marsh and out under the A419 road. It runs to the east of the town through Stratton St Margaret, South Marston and Coleshill, Berkshire.

The Cole joins the Thames near Lechlade from the southern bank near the A417 bridge on the reach above Buscot Lock. The river flows through National Trust land. Here several mills have been built on the river, which have altered its course by drawing millstreams and ponds from it.

The river had become polluted and has been restored in the past few years by allowing it to flow on its natural course and by redeveloping the river bed. This is intended help increase the biodiversity of the area and of the river itself. The actions taken include raising the river bed to create natural flood meadows and floodplains and putting in meanders to recreate a natural environment. This should also help the local population as the flood risk will decrease as a result of allowing flooding further upstream and in fields adjacent to the river.