Burwell is a small village in Lindsey, the northern part of Lincolnshire. It is on the A16 road, north of Spilsby.

Now a village, Burwell was a mediæval market town.[1] Cropmarks indicated the extent of the settlement.[2]

Burwell Priory, which once stood here, was a Benedictine monastery founded at some point before 1110 by Ansgot of Burwell.[3] It was an alien priory belonging to Grande-Sauve Abbey[4] in Aquitaine. The priory was dissolved in 1427 and sold to the college of Tattershall,[3][5] along with its chapels at Authorpe, Carlton, Muckton, and Walmgate, and other lands around Burwell.[1][6]

The manor house, Burwell Hall, was situated in Burwell Park, and was built in 1760 for Matthew Lister. It was demolished in 1958, and only the stables remain.[7] The manor itself was previously held by Henry Percy, Duke of Northumberland; John, Duke of Bedford; Ralf, Lord Treasurer Cromwell; and Charles Brandon, Duke of Suffolk.[1][8] [9] 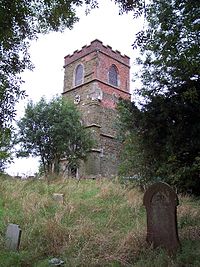 The parish church, St Michael, became redundant on 13 May 1981 and was taken over by the Redundant Churches Fund (now The Churches Conservation Trust) on 27 October 1982. It is Grade I listed building.[10]

The village also had chapels of the Wesleyan Methodists and United Reformed churches, which merged in 1988 making the Wesleyan building redundant.[11] The combined church has since closed.

Burwell Buttercross was converted into a dovecote and is now the village hall. Dating from the beginning of the seventeenth century with later alterations,[12] it is a Grade II listed building.

There is no public house in the village; the old pub, the Stags Head, has closed down.