Bredon Hill is a hill in Worcestershire, south-west of Evesham in the Vale of Evesham. The summit of the hill is in the parish of Kemerton and it extends over parts of eight other parishes (listed below). The hill is geologically part of the Cotswolds and lies within the Cotswolds Area of Outstanding Natural Beauty, although as the result of erosion over millions of years it now stands isolated in the Vale of Evesham

At the summit, adjacent to Kemerton Camp, is a small stone tower called Parsons Folly (or the Banbury Stone Tower) which stands at 52°3’36"N, 2°3’53"W. The tower was built in the mid-18th century for John Parsons, MP (1732–1805), squire of Kemerton Court and intended as a summer house, from which a more extensive view of the surrounding countryside could be seen. The 981 feet natural height of the hill may have contributed to the final height of the tower, whose top now reaches 1,000 feet. A similar tower on Leith Hill increases the overall height from 965 feet to 1,029 feet. The folly became a well-known county landmark, and was believed to have inspired the building of Broadway Tower. The current owners, Overbury Estate, lease out the tower as a mobile phone base station, and a number of large aerials have been fitted to its exterior.

At the summit of the hill are the remains of earthworks from an Iron Age hill fort known as Kemerton Camp, which is believed to have been abandoned in the 1st century A.D. after a considerable battle.

There are also Roman earthworks and a number of ancient standing stones on the hill. One large stone at the summit is called the Banbury Stone, deriving from 'Baenintesburg', a name for the fort in the 8th century. It is known colloquially as the 'Elephant Stone' because of its resemblance to that animal. Another pair of stones below the summit are known as the King and Queen Stones. Local legend tells that if you pass between them you will be cured of illness.

At Elmley Castle on the north side of the hill are the remains of a considerable mediæval castle, once the chief stronghold of the powerful Beauchamp family, who became Earls of Warwick. The castle fell into disrepair during the 16th century, and stone from it was used in the construction of the bridge at Pershore.

A fair and summer games were held every Whitsun at the summit of Bredon Hill until c.1876.

On 17 October 2011 Worcestershire Council announced that Worcestershire's largest-ever hoard of Roman artefacts, including around 4,000 coins, featuring 16 different emperors, had been uncovered.[1] 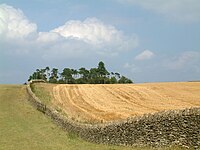 Bredon Hill is one of the most important wildlife sites in England, providing a range of habitats including ancient woodland, calcareous grassland and scrub. A large section of the western and northern scarp was designated a Site of Special Scientific Interest (SSSI) in 1955.[2] Since 2005, an overlapping area has also been designated as a Special Area of Conservation (SAC) under the European Commission Habitats Directive. Part of the SAC is a National Nature Reserve. Bredon Hill is most important as habitat for rare invertebrates, such as the violet click beetle. Natural England and Kemerton Conservation Trust are among those organisations participating in wildlife management on the hill.

Several parts of the hill are managed for wildlife under DEFRA 'Environmental Stewardship' schemes. This includes the area around the summit, which is managed as grassland with open public access.

A large number of public footpaths and bridleways cross the hill from the villages circling its base, and allow for a variety of circular routes to be devised. The Wychavon Way passes over the hill, but does not reach the summit itself, passing close by (necessitating a short easy detour).

The Ordnance Survey 1:50,000 map has for many years shown the top as 229 metres high. That this is a typographical error is obvious from the contours; the 1:25,000 map shows the spot height as 299 metres.

Literature and the arts

Bredon Hill is the birthplace of farmer and writer Fred Archer (1915–1999), whose many books describe, in vivid prose, life on the farms and in the villages, particularly during the first part of the 20th century.

The author John Moore described life on and around Bredon Hill in the early 20th century in the 'Brensham Trilogy'.

The hill is immortalised in poem 21 of A. E. Housman's 1896 anthology A Shropshire Lad.

In summertime on Bredon
The bells they sound so clear;
Round both the shires they ring them
In steeples far and near,
A happy noise to hear.

Here of a Sunday morning
My love and I would lie,
And see the coloured counties,
And hear the larks so high
About us in the sky.

The bells would ring to call her
In valleys miles away;
"Come all to church, good people;
Good people come and pray."
But here my love would stay.

And I would turn and answer
Among the springing thyme,
"Oh, peal upon our wedding,
And we will hear the chime,
And come to church in time."

But when the snows at Christmas
On Bredon top were strown,
My love rose up so early
And stole out unbeknown
And went to church alone.

They tolled the one bell only,
Groom there was none to see,
The mourners followed after,
And so to church went she,
And would not wait for me.

The bells they sound on Bredon,
And still the steeples hum,
"Come all to church, good people."
O noisy bells, be dumb;
I hear you, I will come.

When Worcester Cathedral was damaged in the civil war, it was repaired with stone brought from Bredon.

The name "Bredon Hill" is unusual in that it combines the name for "hill" in three different languages (compare Pendle Hill). The word "bre" is of Celtic origin, and "don" is an Old English usage.

A well-known local saying, which predicts bad weather, goes: "When Bredon Hill has on his hat, men of the vale beware of that".

The hill is made up from land belonging to nine parishes. Working clockwise from the summit these are:

There is a lively local arts scene around the hill such as the Bredon Hill Open Studios group of artists, designers and craftspeople who open up their studios to the public. This group includes the artist Samantha Dadd, Conderton Pottery and Beckford Silk-printing workshop. Contemporary artists painting the local area include Nick Holdsworth and Tony Whitehouse.