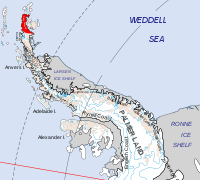 Trinity Peninsula is the extreme northern portion of Graham Land, in the British Antarctic Territory. The peninsula extends northeastward for about 80 miles to Cape Dubouzet from an imaginary line connecting Cape Kjellman on the northwest coast and Cape Longing on the southeast coast.

The peninsula was first sighted on 30 January 1820 by Edward Bransfield, Master, Royal Navy, who charted its north coast, immediately after his charting of the newly discovered South Shetland Islands nearby.

The north coast of the peninsula was further charted by French Antarctic Expedition of 1837-40, which on 27 February 1838 (unaware of Bransfield's name) named the coast Terre Louis Philippe after Louis Philippe I, King of the French. The Dutch expedition in the 1890s accepted the French name (Lodewijk-Filips-Land), as did Nordenskiöld (Louis-Philippe Landet).

In the century following the peninsula's discovery, chartmakers used various names, inclusing Trinity Land, Palmer Land, and Louis Philippe Land, for this portion of the land, each name having some historical merit. The currently accepted name derives from "Trinity Land", given by Bransfield during 1820 in likely recognition of the Corporation of Trinity House, Britain's maritime pilotage authority, although the precise application by him has not been identified with certainty and is a matter of different interpretation by Antarctic historians.

The east and south-east coasts of the peninsula were surveyed by Falkland Islands Dependencies Survey from their base at Hope Bay 1944-46 and the north coast in 1946-48. The peninsula was photographed from the air in 1956-57.