Borrowash is a village in Derbyshire, situated immediately east of the Derby city boundary. The appropriate civil parish is called Ockbrook and Borrowash.

In the village there is a Co-operative supermarket, which is located amongst a number of amenities including a butcher, estate agent, a Post Office, library, Chip Shop, hardware shop and several hairdressers. Further to this are public houses including The Nags Head and The Wilmot Arms, as well as two Indian restaurants and some takeaways.

The local football team Borrowash Victoria A.F.C. play in the East Midlands Counties Football League, but their home ground, Borrowash Road, is in the neighbouring Derby suburb of Spondon. The ground is situated next door to Graham Street Prims, who have a fierce rivalry with each other, and are currently competing in the same league. Also on the same ground is an archery club, Anchor Bowmen Archery Club. Other sporting affiliations include Ockbrook and Borrowash Lawn Tennis Club situated on Nottingham Road.

For further educational facilities (non-fee paying), the closest secondary school is West Park in Spondon where, as of 2004, a sixth form no longer exists and consequently the closest provider of further education is Friesland School in Sandiacre. The nearest university is the University of Derby. 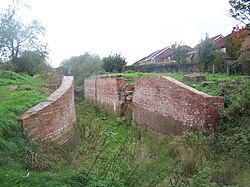 To the south of the village there was once a railway station (Borrowash railway station opened by the Midland Counties Railway) and the Derby Canal with two locks. The railway station was built in 1839 and closed in 1966, But the train platform still served as stopping point in Borrowash to passengers until 1978, Then platform was completely removed. The canal is currently being restored, with the work on one of the locks nearing completion.[1] The area which the canal used to run through is currently a public footpath linking Borrowash and Spondon.

Route 6 on the National Cycle network also connects Borrowash to Derby via a riverside path, which runs along the route of the canal to Elvaston then parallel to this for the duration of the journey.