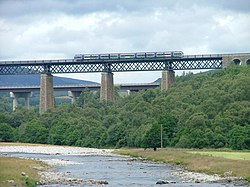 Railway and A9 viaducts crossing the Findhorn at Tomatin

Moy and Dalarossie is a parish in the north-east of Inverness-shire. The name comes from the Gaelic Magh, meaning 'a plain' and DalFhearghais, 'Fergus' dale').

The whole parish may be said to consist of two straths, that in the north-west occupied by Loch Moy and the streams flowing into it, and the much larger one extending south-westward through the length of the parish being occupied by the Findhorn and the streams flowing into it. The hamlets of Dalbeg, Dalmigavie, Corrievorrie, Findhorn Bridge and Tomatin are situated in this latter strath.