Blanchardstown is a village of County Dublin which has become large outer suburb of Dublin itself. The village of today was built out from a small village since the 1960s. It is six miles north-west of the city centre, and within the Barony of Castleknock.

One of Ireland's largest shopping and leisure centres, the Blanchardstown Centre, is located in the area.

The name Blanchardstown comes from the Blanchard family, who were granted their estate sometime between 1250 and 1260. The name 'Blanchard' is thought to come from the old French word 'blanch' meaning white, in turn potentially referring to white or fair hair.[1] 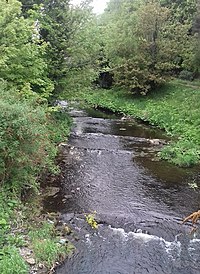 The River Tolka by Connolly Hospital

Blanchardstown is just outside Dublin's M50 motorway ring road, slightly to the north of the tolled crossing of the River Liffey. The core of the suburb is the townland of the same name, containing the village itself and the Roselawn housing area.[2] It is bordered to the east by the suburb of Castleknock, to the west by Coolmine, which includes some areas, including Blanchardstown Shopping Centre, central to the district, and Clonsilla/Ongar, to the north by Tyrellstown and Hollystown, and to the south and south-east by Porterstown and Diswellstown. The stretch of suburban housing from Castleknock Way north to the Old Navan Road and Talbot Court, including Laurel Lodge, has an ambiguous status - all of it is in the townland of Blanchardstown.[3] The townland has an area of over 454 acres.[4]

The River Tolka, the second river of Dublin, runs through the centre of the area, meandering to run just north of the village core, and then further north to pass the Connolly Memorial Hospital and then Abbotstown.

The Royal Canal and the Dublin-Sligo railway line pass along the southern edge of Blanchardstown proper from east to west.

The National Sports Campus is located in Blanchardstown and includes the National Aquatic Centre, a major indoor aquatics facility with a 50m swimming pool, diving pool, leisure pool and aquapark, and fitness centre.[5] The centre hosted the 2003 Special Olympics World Summer Games and a number of international swimming events since then.[citation needed]