Blackrock is a suburb of Dublin, in County Dublin, two miles north-west of Dún Laoghaire.

Blackrock covers a large but not precisely defined area, rising from sea level on the coast to 300 feet at White's Cross on the N11 national primary road. Blackrock is bordered by Booterstown, Mount Merrion, Stillorgan, Foxrock, Deansgrange and Monkstown.

The Blackrock bypass was built in the late 1980s, carrying the N31 road which joins the harbour at Dún Laoghaire to the national Primary Route network. 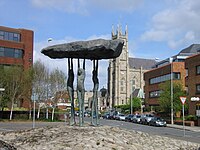 Blackrock was historically a small fishing village, which began to be developed only in the 19th century, although a settlement at the same location from mediæval times is well attested to.

Blackrock, some hundreds of years ago was variously called Newtown-at-the Black Rock, Newtown on the Strand by the Black Rock, Newtown Castle Byrne, or simply Newtown, so that "Blackrock" is simply an abbreviation of one of its ancient titles. The town was called Newtown in a 1488 Act of Parliament. The name still survives in Newtown Avenue, and Newtown House. It was thus distinguished from Newtown-in-the-Deer-Park, as the village of Newtown Park was then called, from the circumstance that it was built in the Deer Park belonging to Stillorgan House, or Castle.

Blackrock is named after the local geological rock formation to be found in the area of Blackrock Park. Most of it is now buried under the park, but it is said that it is possible to see it just north of the pond. The rock itself is a limestone calp that when wet appears black, thus giving the name Black Rock. For the construction of the railway in 1834, the rock was extensively used for the wall cappings between Williamstown and Blackrock and can also be seen in the walls of the train station at Blackrock.[1][2] St. Marys Chapel of Ease on St. Mary's Place, nicknamed the Black Church, is constructed using the same Black Rock (limestone calp), although the rock used in its construction is locally sourced to the church.[3] 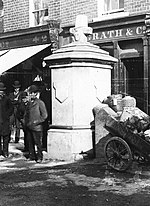 The Rock Road, which forms the south-western boundary of the park, is said to form part of one of the oldest roads in the country, having been part of the ancient Slíghe Chualann constructed by the High King of Ireland several centuries before St. Patrick, to connect Tara with what is now southern Dublin and north-east Wicklow. The road may have facilitated the O'Toole and the O'Byrne clans in their raids on the neighbourhood of Dublin.

In 1787, the Blackrock road was such a common place for highway robberies that, in an attempt to put an end to these crimes, a local meeting was held at Jennett's Tavern in Blackrock and chaired by the then Lord Viscount Ranelagh. The meeting concluded when one of the outcomes was "Resolved, That we will give a reward of £20 to any person who will apprehend and prosecute to conviction any person guilty of a robbery upon the Blackrock-road, from Dublin to Dunleary, Bullock, Dalkey, Rochestown, Cabinteely, and Loughlinstown". In 1826, Rev. George Wogan, the curate of Donnybrook, was murdered in his house in Spafield Place near Ballsbridge. Later on the evening of his murder, two bandits were apprehended for a highway robbery on the Blackrock Road and confessed to the murder, and were hanged. This illustrates the danger faced by travellers of the Blackrock road at certain times in the past.[4] 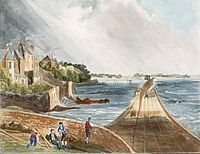 Blackrock had a beach that was a popular bathing place until the construction of the railway close to the shoreline. The space between the shore and the railway created an area that flooded with seawater at high tide. This created a malodorous salty marsh similar to that at Booterstown Marsh. This marsh was a cause of local discomfort for years until it was decided by the Blackrock Town Commissioners (established in 1860) to fill the area in and create a park. The park, which stretches from Blackrock to Booterstown (encompassing Williamstown), was created in the early 1870s. The granite gates at the main entrance once belonged to a house called Vauxhall. The gardens at the entrance were part of the gardens of the old house.

The Williamstown Martello Tower in Blackrock Park was built between 1804–1806. When the tower was built, it would have been surrounded by seawater at high tide as it was built in the inter-tidal beach area. The tower became isolated from the sea when the construction of the railway took place, but seawater still flowed into the area at high tide. Only the filling in of the area to form the Blackrock Park allowed the tower was to be on dry land. That part of the tower, which is visible today, is actually the first floor as the ground floor is buried underground.

The Blackrock baths were provided for by the railway company in 1839 and were built beside the Blackrock train station. A special train ticket also permitted entrance to the baths. In 1887, the baths were rebuilt in concrete with a large gentlemen's bath and a smaller ladies' bath. In 1928, the Urban District Council bought the baths for £2,000 and readied them for the Tailteann Games. The baths, with a 50-metre pool, were well known for their swimming galas and water polo and could accommodate up to 1,000 spectators.

Eddie Heron lived in Sandycove and is known for his achievement as 36 years undefeated Springboard and Highboard Diving Champion of Ireland. A plaque commemorating him is on the railway bridge that crosses over to the baths.

On 11 September 1891, Thomas Crean, while swimming with fellow students near Blackrock, helped rescue a 21-year-old art student named William Ahern. Crean noticed that Ahern was in trouble and together with a young solicitor named Leachman from Dundrum, he managed to bring him ashore. For his bravery, he was awarded a medal by the Royal Humane Society.

The decline in the use of the baths started in the 1960s when indoor heated swimming pools started to appear. Dún Laoghaire Corporation closed the Blackrock Baths in the late 1980s and by 1992, due to lack of maintenance, parts of the baths were dismantled. They have since been sold to developers Treasury Holdings. In 2013, the baths were demolished due to safety concerns.

Many fine houses of historical and architectural significance were built in the area, some of which are still existing today, while others have been demolished.

Frescati House, built in 1739, was a fine example and was at one time the childhood home of Lord Edward FitzGerald. Frescati, despite much local protest to save it, was demolished in 1983 and Frascati Shopping Centre now stands in its place.

Maretimo House was built in 1770 as a summer residence for Nicholas Lawless, 1st Baron Cloncurry, who had his main house at Lyons Hill, County Kildare. His son Valentine Lawless, 2nd Baron Cloncurry gave land beside the house for the building of the Roman Catholic Church, St. John the Baptist. At the time of the construction of the Dublin and Kingstown Railway, Lord Cloncurry was compensated with, among other things, a private railway bridge and harbour. Maretimo house was demolished in 1970 and apartments of the same name now stand in its place. The private railway bridge can still be seen today, but is not maintained and its once elegant walkway has been replaced by a corrugated iron walkway.[5]

Blackrock House, built in 1774 by Sir John Lees (1737–1811), is one of a few 18th-century houses built with red brick. It has some fine features such as a two-storey red brick porch. It also features a large coach-house, stable yard and gate-lodge. With the construction of the railway, Lees was also compensated with a tunnel being built through his land. There is a ruin of a small summer-house near Lord Cloncurry's harbour. The house is still here to be seen today, although it is currently divided into flats.[5]

Rosefield (previously Belleville) was demolished in 1983 to make way for the Blackrock Clinic. Rosefield was one of the first seaside villas built on the Fitzwilliam estate around 1750.[5]

Talbot Lodge was an 18th-century villa that was later doubled in size. It was bought by the Sisters of Charity and became part of the Linden Convalescent Home. It was sold to developers and was demolished in December 1989.[5]

Neptune House, built in 1767, is a Georgian building with a colourful history. It was the country residence of John Scott, the first Earl of Clonmel, who was chief justice of the King's Bench in 1784. He was also known as 'Copper-faced Jack' for his aggressiveness in argument and skin tone. In 1916, British troops who landed in Dún Laoghaire during the Easter Rising stayed in Neptune House.

The Church of Ireland built two churches in the area. The Booterstown parish was established in 1821 from the Donnybrook parish and the first church built was St. Philip and St. James Church in 1822 on Cross Avenue. To follow was All Saints Church on Carysfort Avenue in 1868.

The Roman Catholic Daughters of Charity of Saint Vincent de Paul founded St. Catherine's Seminary in 1939 with the purchase of the house Dunardagh, Temple Hill. The Dominican Order came to Blackrock in the 1830s with the purchase of the house Sion Hill on the corner of Mount Merrion Avenue and Cross Avenue. They set up Sion Hill Convent, a girls' school called Dominican College Sion Hill, and Froebel College of Education.

The Methodist congregation established a church on George's Avenue in the 19th century. The church is still standing but disused. The congregation moved to a new church beside the town hall on Newtown Avenue. The congregation consolidated with that of Dún Laoghaire around the middle of the 20th century. Since then the Blackrock building is used as a community meeting place called Urban Junction.[7][8]

The Presbyterian Church in Ireland established their Blackrock Congregation in 1895. It met in the Blackrock Town Hall until they built St. Andrew's Church on Mount Merrion Avenue in 1899.

The Society of Friends (Quakers) have their Dublin burial grounds, Friends Burial Ground, at Temple Hill. Their meeting house is on Carrickbrennan Road, Monkstown.[9]