Monkstown, historically known as Carrickbrennan, is a suburban village in County Dublin in the south of the county, on the coast, between Blackrock and Dún Laoghaire.

The lands of the Carrickbrennan estate form the greater part of the civil parish of Monkstown.

A church was built at Carrickbrennan (as Monkstown was then known) before the 8th century, and dedicated to Saint Mochonna, bishop of Inispatrick or Holmpatrick by Skerries. The grange of Carrickbrennan, otherwise Monkstown, was granted by the King to the Cistercian monks of Saint Mary's Abbey, Dublin, in 1200. The monks built their grange near to the church, and the village grew up around it. The lands of which it was a part extended as far south as Bulloch harbour on the outskirts of Dalkey, where the monks constructed a fishing harbour protected by a castle.[1]

In 1539, King Henry VIII awarded the Monkstown lands to Sir John Travers, Master of the Ordnance in Ireland. John Travers lived in his Castle at Monkstown from 1557 to his death in 1562 (he is buried in the Carrickbrennan Graveyard) when the property fell to James Eustace 3rd Viscount Baltinglass through his marriage to Mary Travers. In 1580, the Castle was used as a rebellion stronghold, after which it was awarded to Sir Henry Wallop, Vice-Treasurer of Ireland. The lands were later returned to Mary, the widowed Lady Baltinglass, who later married Gerald Alymer. On her death in 1610 the Castle was transferred to the Chevers family through the marriage of Mary Travers's sister Catherine to John Chevers, and the property passed directly to his second son Henry Chevers, who married Catherine, daughter of Sir Richard Fitzwilliam. Henry and Catherine Chevers lived here with their four children.

Upon the death of Henry in 1640, the castle and lands were passed to Walter Cheevers. Walter and family received command to vacate Monkstown in 1653 by the Cromwellian Commissioners, and transplanted to Killyan, County Galway. In 1660, Walter Chevers was restored to his estate at Monkstown Castle, until his death in 1678. His death occurred on the 20th day of December 1678, and he was buried at Mountoun (Monkstown), two days later on 22nd.[2] The Shivers family of America trace their lineage to Thomas Chevers brother of Walter Chevers of Monkstown, through the Cromwellian warrant, authorized on 26 November 1653 for Captain John Whittey to transport the Thomas Chevers family to America.

Monkstown was later purchased by the Archbishop of Armagh, Michael Boyle, and his son Murrough Boyle, 1st Viscount Blesington enlarged the castle, making it one of the finest residences.

Until about 1800, Monkstown was a rural area of open countryside, dotted here and there with large houses owned by the merchants of Dublin. The Monkstown Church (Church of Ireland) had been built – but was smaller than the present church.

The two small local rivers met in the area now called Pakenham Road. The river known as Micky Briens originated in Sallynoggin. A lake beside Monkstown Castle had one small island. The coastline was ragged and rocky, with a harbour stretching over 100 yards inland at the mouth of the aforementioned rivers, adjacent to the area now occupied by the West Pier. Dunleary was then a small group of houses in the area of the Purty Kitchen, and the present area of Dún Laoghaire was an area of rocky outcrops and later, quarries.

Wednesday, 18 November 1807 a night of disasters in southern Dublin. In an horrific storm, two sailing ships, the Rochdale and the Prince of Wales were blown on to the rocks, one at Seapoint and the other at Blackrock. About 400 lives in total were lost on that night, many of them washed up on the shore at Monkstown. The disaster was one of the factors which led to the building of Dún Laoghaire Harbour. Most of the victims were buried in Carrickbrennan Churchyard.

The building of Dún Laoghaire harbour gave an impetus to the area, and Montpelier Parade was the first of many terraces built in the area. The coming of the railway in 1837 had a much greater impact. Firstly, it changed the topology of the coast, and secondly, it led to Monkstown becoming a commuter suburb of the city of Dublin. Most of the houses along Monkstown Road and the avenues north of that road were constructed over the next 30 years. The maps of 1870 show this phase completed, but the rest of Monkstown consists of mansions surrounded by extensive gardens. 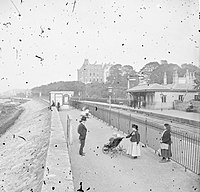 For the following 50 years there was little change. The post-war developments of Castle Park, Richmond, Windsor, etc. and the more recent developments of Brook Court, Monkstown Valley, and Carrickbrennan Lawn mean that there is little opportunity for further development. 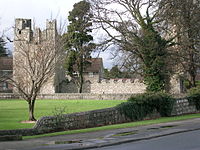 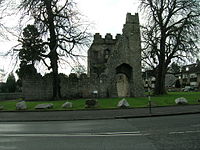 Monkstown Castle, which was probably built in the 12th or 13th centuries, was erected by the monks of the abbey of the Virgin Mary, near Dublin.

Monkstown is also noted for its coastline, which is home to a number of historical buildings of the Victorian, Georgian and Edwardian periods. One of the most notable buildings of the Salthill and Monkstown area is a Martello Tower, located at Seapoint beach.